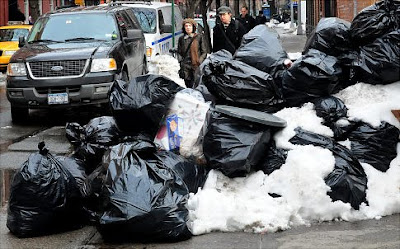 Sanitation workers destroyed headstones at a Jewish cemetery in Brooklyn during a belated cleanup of Bay Parkway ( Sheepshead Bites )
Posted by The Phantom at 10:56 AM

Forget everything you said, Phantom. the real reason is a ticket blitz. The city needs $$$$$$$$$

The garbage trucks were driving back and forth down Bay Ridge Avenue all day yesterday with their plows down - yes, *plowing the dry asphalt*. Meanwhile, half the cars are still snowed in and the garbage is piling up.... It's almost comical.

I observed the exact same thing over the weekend. A lot of sanitation guys standing around smoking cigarettes too

There is a lot of " pretend working " and overtime grabbing going on.

A few days ago ( Thursday? ) I got sick of seeing the NW corner crosswalk at 68th and Fourth Avenue impassible, so I shoveled a path and cleared the catch basin myself.

Overnight, the union criminals of the Sanitation Dept shoved a huge pile of snow on the crosswalk,destroying the path and obstructing the catch basin.

The sabotage is continuing. I don't think that Bloomberg has the stones to confront the unions on this issue. The NY Times has still not reported on this issue that I can see. Only the Post.