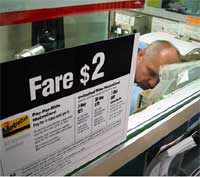 Sleeping Bay Ridge Beauty
This past Friday's NY Post reports that a token clerk at Bay Ridge Avenue was caught sleeping on the job, with his shoes off! The 43 year old man was busted at 2am by subway rider Nathan Switzer, who took a picture of the clerk with his camera phone. He then e-mailed them to the NY Post, which couldn't wait to print the story.

This past January, the Post reported on another clerk, who was caught sleeping at a Manhattan station during the day. The earlier man was fired.

The guy in the photo? He's somebody else entirely. If you see him, don't talk too loudly. You might wake him up.

--
Lets Go www.brooklynmetfan.com!
Added the Brooklyn Blogroll of Honor is Brooklyn Met Fan. He'll also be added to the blogroll at View from 103, the companion to this site. Don't know what part of Brooklyn the author of this site hails from. Back in the 1960s nearly everyone in Bay Ridge and in Brooklyn was a Met fan, and you had to be a weirdo to root for the Yankees. Thats no longer true--but the Mets are on the way up, which won't hurt them as they try to compete on what used to be their undisputed home turf.
Posted by The Phantom at 9:18 PM

Well what the hell else are they gonna do? That's why they made those machines, ain't it?

Yeah, there is nothing for them to do.

But here I sympathize with the MTA.

When they try to remove token booth attendants, even from stations that noone at all uses ( ie Bowery on the J/Z train, Rockaway Park stations on the A ) the local phony politicians scream bloody murder.

That would be the same politicians who say that they want to keep the fare down, but who won't allow the MTA to do the things that would reduce costs.

BrooklynMetFan is excited to be a aprt of the Phantom's blogging empire!

BMF is from the Gowanus & Park Slope neighborhoods of Brooklyn and is hard at work trying to reclaim the National League borough of Brooklyn as the Mets rightful territory!

if you ever have something Met related you want to get off your chest swing by Brooklynmetfan.com

it's looking good to be Met fan this year in first place since day one of the season, let's go mets!