I took a bus trip to Waimea Canyon. On the way, we stopped at the south shore to see the "blowhole". There is a hole in the (lava-formed) rock here. When the tide comes in, the water comes out like water from a whale's spout. 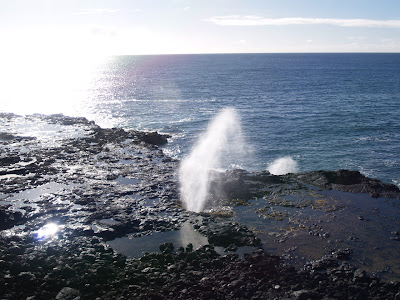 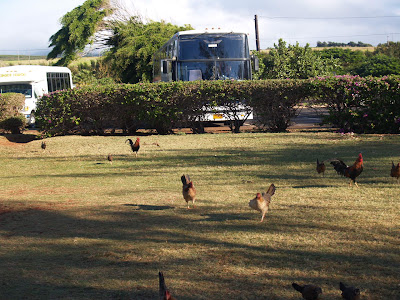 In July 1992, Hurricane Iniki hit Hawaii. It was the worst hurricane to hit the islands. It caused immense damage in Kauai. It also blew many chicken coops apart, liberating the chickens. Many chickens survived in the wild. They've multiplied like mad. This is the only place in the world where I've seen wild chickens. They're everywhere, even in the towns. 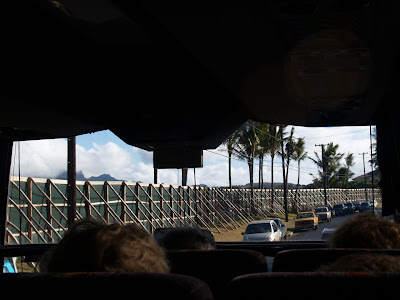 Hawaii has unique problems. It's a high-cost, low-wage state, even more than Florida. Housing is very expensive. Much of the new housing being built is "McMansions", such as those that will be constructed behind this ugly fence near Poipo. These houses will be for rich Californians, not Hawaiians. 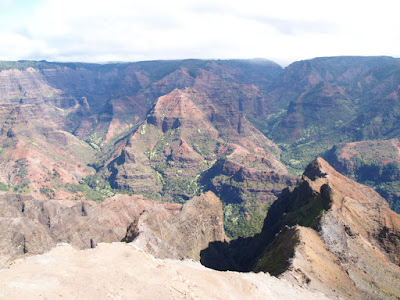 Mark Twain called Waimea Canyon "the Grand Canyon of the Pacific". As with most things, he was right. It's gorgeous. This picture does not do it justice. No photo could do it justice. I'm glad that I saw it.
Posted by The Phantom at 4:11 AM

Great pics, Phantom. I will be there in December -god willing.

Very nice pics...I live here and see these sights all the time...your commentary about the economy is dead on...this is a very tough place to survive...even for an educated "mainlander"....despite it's charm and beauty, we're going back from where we came...I'll miss this place, though...