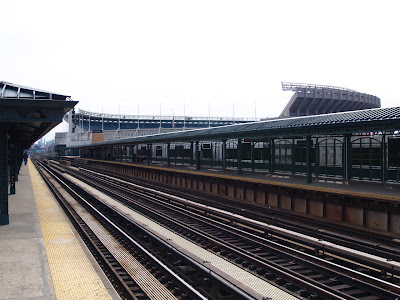 I took a ride up to Yankee Stadium today. There wasn't a game on, but I wanted to buy tickets for a game next month.

Since 1923, the great ballpark has lurked over the elevated train platform at 161st Street and River Avenue. But it's days are numbered. Yankee Stadium is on Death Row. 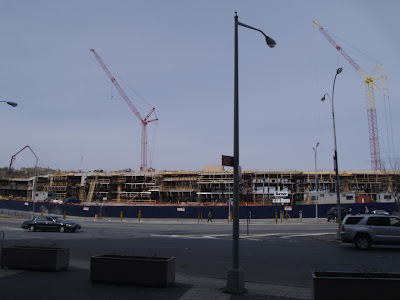 But across Rupert Place, in what once was McCombs Dam Park, a new Yankee Stadium is rapidly taking form. I'm surprised that they've made this much progress. 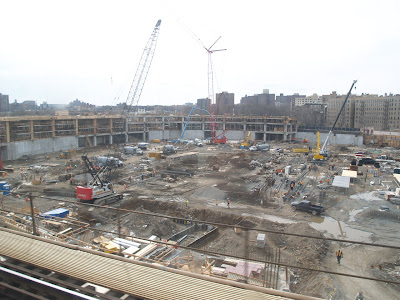 A view into the pit from a No. 4 train heading downtown. Even on a Saturday, there was a lot of activity there. The new stadium will be wonderful, I know that. But I'll surely miss the old Yankee Stadium, and the greatness that it has been known for.
Posted by The Phantom at 12:25 AM

I first visited Yankee Stadium in 1960 at 9 years old. Saw my heroes, Mickey Mantle, Roger Maris, Whitey Ford and all the amazing Yankees. It was "magical". (We walked among the monuments in the outfield),

My family with (2) young baseball players took me again to visit, several years ago and again it was "magical".

Experiences of a lifetime, I will always fondly remember.

I have a friend in NY who hails from Seymour, Indiana.

And as you're surely aware, we used to have a pretty good first baseman from Evansville!