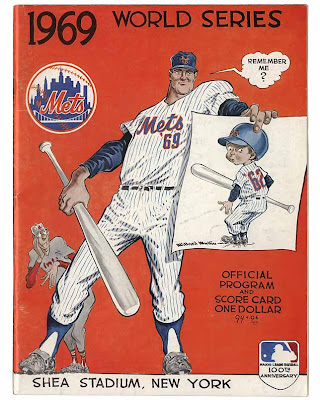 Well, it took me 38 years to see the game in its entirety, but I've just watched the Mets beat the Mighty Baltimore Orioles in Game Four of the World Series. The SNY Sports Channel is replaying the 1969 Series on days when the Mets are off, and good for them.

The color was a little faded, the images not so crisp, but this was beautiful to watch.

These were days long before the big money came into baseball--Curt Gowdy mentioned that players on the winning team would get $15,000.

Baseball was absolutely a better game then--no Designated Hitter, no "pitch counts", no constant insertion of relief pitchers to get a batter or two out. It was a crisper, more exciting game.

Plus a lot less advertising--no ads painted on the outfield fence, no electronic ads interfering with the image of the batter and catcher on TV. No booming music between innings and between pitches- Jane Jarvis at the organ once in a while, and thats that.

Funny enough, I listened to the whole of Game 5 from the 1969 series recently. It was available via mets.com. I can't remember who I stumbled onto it, but when I found it I listened to the whole game. I was a little disappointed that there was no Lindsay Nelson or Bob Murphy, but I enjoyed it all the same. It sounded like ancient history, which I guess it was, really.