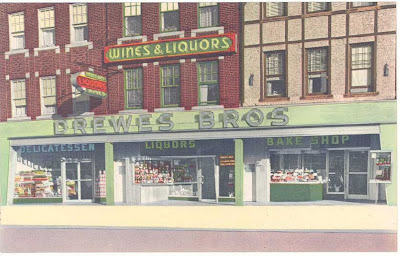 Oh baby this goes back.

Drewes Village was a "complex", I believe with common ownership on Fourth Avenue between 68th Street and 69th Street(Bay Ridge Avenue). There was a deli, a liquor store, and a bakery.

When my family moved to 68th Street in the early 1960s, all three Drewes stores were going strong.

The deli did a roaring trade in canned goods, cold cuts, quart bottles of beer. They made an honest hero sandwich. There were always roast chickens for sale. If you were a little short that week, no problem--if they knew you, the clerk would write down what you owed in his book, and you could true it up on payday. All on the honor system--you didn't have to sign anything.

There was a small Scottish colony in the immediate neighborhood in those days, and some of them staffed Drewes Bake Shop. There was the most wonderful smell coming out of there on a Sunday morning, inviting you to come in to buy scones, soda breads, and flat oatmeal cookies with a white sugared coating on top. There was a fairly long line in there when Sunday services let out from nearby OLA, and the nearer still Lutheran and Methodist churches.

Unfortunately, Drewes is long gone. What was the deli is now a Latin diner. The bakery is now a so-so Chinese takeout place with harsh fluorescent lighting and plastic booths.

I found the above image this afternoon on ebay. Someone was selling a linen postcard with this image on it. The bidding came to an end a few minutes ago, and I now own this little relic of a long time ago, so near I could touch it.
Posted by The Phantom at 10:26 PM

I remember Frankie --was it Fallon, or Folan?--

I think he also owned the travel agency to the left of the deli, Travel a Go Go?

Used to see the son (Frank Jr?) around the neighborhood, but have not seen him in a long time.

Unlike the stereotype of wrestlers, esp today, he was a gentleman indeed.

No cars. No meters. No Arabs. No Mexicans.

In the late sixties and seventies

I remember gangs, of teenagers fighting in Lief Erikson Park , bottles being smashed over heads.

Of rocks being thrown through windows and cars being vandalized for "fun".

It wasn't the Arabs or Mexicans doing these things, bro.