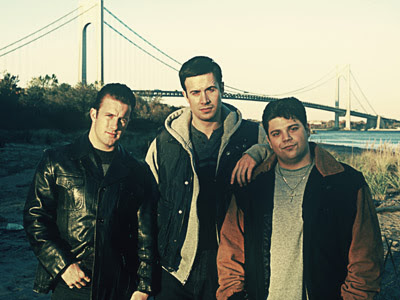 L to R: Scott Caan as Carmine, Freddie Prinze Jr. as Mike,
and Jerry Ferrara as Bobby in BROOKLYN RULES

The Bay Ridge of the mid 1980s is the backdrop for Brooklyn Rules, and it's a violent place, where the Mafia has a firm grip on things. One of the first scenes depicts low level mobster Caesar Manganaro ( Alec Baldwin ) kicking someone down the steps of the 95th Street subway station. The young Carmine ( Scott Caan ) watches the assault with awe, and becomes a mafia wannabee on the spot. Mike ( Freddie Prinze ) has a bit of the smart aleck in him but is smart and ambitious enough to get himself into Columbia University. Bobby, he just wants a job at the Post Office.

As you'll expect from a mafia movie, there are the requisite truck hijackings, and your fair share of violent incidents. You'll never look at a meat slicer the same way, let's just say.

This movie brought echoes of any number of Mafia movies, but it also will make any Bay Ridge or Brooklyn person think of Saturday Night Fever. Goofing around the neighborhood with the guys, the attraction of Manhattan, inferiority feelings brought on by it. Mike brings the guys to a fancy Manhattan joint, where the bouncer won't let them in-- they're in sneakers. Brings you right to SNF AND John Trovolta shuffling his feet after moving Karen Lynn Gorney to the fancy Manhattan townhouse.

Much of the movie was shot on location in Brooklyn, so you see shots of the Verrazano Bridge, St. Patrick's Church, the 95th St. subway station, and the Cyclone. Key parts are shown in what are meant to be the long gone Pastels dance club and the Hamilton House.

Alec Baldwin is a terrific Caesar. You'll believe him as the lawgiver among thieves, the neighborhood head-buster, the cigarette-smoking wiseguy in Pastel's VIP section.

The other characters for some reason seemed flat to me, and I don't know why. I can't criticize any performance, and the dialogue was, at times excellent.

This movie absolutely bombed at the box office in May, but it has just come out on DVD. While not great, it's worth renting.