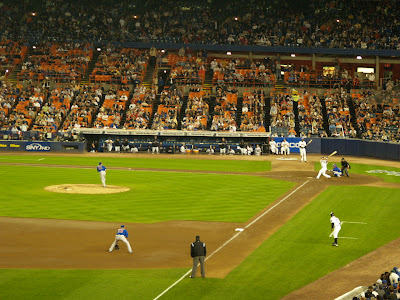 Yesterday, went to the Mets-Cubs game. We were in Loge Section 28. Despite the fact that it is in short left field, the view was good. You can't go wrong with the Loge.

Only two things went wrong last night. The first was that the section was crawling with Cubs fans.

The second was that they had plenty to cheer about as the Cubs won 9-5. And as they say "it wasn't that close". Here, one of the good moments as David Wright lofts a chip shot to left for his 33rd Home Run. (click to enlarge)

Jason Marquis, of Staten Island's Tottenville High School, pitched 6 2/3 innings for the win and hit a grand slam in the fourth inning just to make sure.

I'll be back out there Friday night.
Posted by The Phantom at 9:28 PM