Subway and Bus Cuts to Bay Ridge: The Good and the Bad 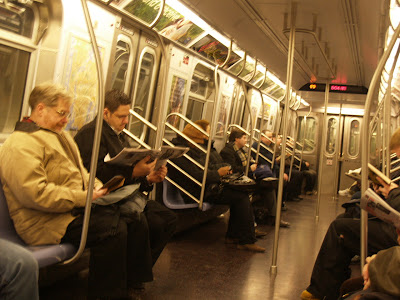 "Rush hour" at on the northbound M train, at 804am Wednesday December 26 at 36th Street. This is as crowded as this train gets- an hour when the R is very crowded, and a time when you have to fight your way onto the N or D train. These lines have been mismanaged for many years.

There's an economic crisis, and services are going to be cut. The buses and subways are not immune, nor should they be.

The Brooklyn paper reports that the following route cuts , which would impact Bay Ridge/Sunset Park/Bensonhurst directly or indirectly are possible:
First, I'm not going to be like our elected officials and pretend that nothing should be cut. Some of these services should be cut, and should have been cut a long time ago.

Elimination of X27 Bus Service on the weekend is Completely Justified

Let's begin with the X27 bus. This service runs a ludicrous route along Shore Road along the far edge of the neighborhood, before it hits the Gowanus Expressway, which means that it is inaccessible to most Bay Ridge residents. It's not a Bay Ridge service at all, it's a service that only has value to those who live on Shore Road or Narrows Avenue.

The dirty little secret is that this service is not that popular. The buses are rather crowded in the rush hour ( though rarely full ), and they are rather empty mid day or late night, and near completely empty during over the weekend. Don't believe me? Take a walk over to Senator Street/Third Avenue on the weekend and watch any bus as it arrives back from Manhattan or just before it goes into Manhattan. I'll bet you a round at Three Jolly Pigeons that the bus will be empty.

These buses serve a tiny minority of Bay Ridge residents. Weekend service should be cut, for budgetary and environmental reasons. Its bad environmental policy to have empty buses running along a crowded highway.

Elimination of the W Train is Completely Justified

The W Train runs from Astoria down Broadway in Manhattan, and technically doesn't go near Bay Ridge.

Except that if you are traveling early in the morning, sometimes you can luck out and catch a W train on the way from the Coney Island yards to Manhattan. They pick up passengers on the local track from 59th Street into Manhattan with a largely empty train. It's great to catch this train, but its an inefficient use of resources.

Another way this train impacts Bay Ridge is that they bunch up around its Whitehall Street terminus, as a southbound W waits for the northbound W to leave the center island track. This can and does cause delays on the southbound R train during the day. I notice it during the late evening trains.

This is a lot of trouble caused by a W train that seems to run empty to uncrowded all the time. This train is like the V line - there was never a good reason for it to exist. Lets kill the W train right now. Like the weekend X27, this is a no brainer.

Shrink the M Train? Only if They Revive the Chambers Street Shuttles

Let's get real- few people take the rush hour lower Manhattan- Bay Parkway leg of this train. While the R/N/D trains are crowded all through the rush hours, the M Trainis one train where you have nearly an 100% chance of getting a seat.

And, just as the W causes delays at Whitehall, the M has a nasty habit of arriving at 36th Street at the same time as the D train. The southbound (crowded) D train is always given priority and the M waits on the local platform, blocking the more crowded Bay Ridge bound R train.

The south Brooklyn M train should be eliminated, but some of the resulting savings should be used to re-establish the Chambers Street Special, running from 95th Street to Chambers Street during morning and evening rush hours. This would alleviate the current overcrowding on the R train, would proactively address the greater overcrowding that will take place on R trains from 36th and Borough Hall if the M/W are eliminated and nothing takes their place, and does not involve unnecessary crossovers from one track to another.

The M train never made sense as it ran in south Brooklyn. Running it along the West End line was evidently done for the convenience of the Transit Authority ( who can run empty southbound trains right into the Coney Island yards ) and never made sense as far as respects passenger flows or operational efficiency for most of the route.

Don't Even Think of Getting Rid of the Third Avenue Bus

The B37 bus runs faster than the sluggish Fifth Avenue bus. If you take it all the way to downtown Brooklyn, you'll see that lots of people use it, especially older people who are nervous about taking the crowded subway or who have a hard time navigating the subway steps.

If this service is removed, the entire Third Avenue corridor that runs under the creaking horror that is the Gowanus Expressway will be turned into a lifeless desert. Elimination of the Third Avenue Bus cannot be considered.

If cuts must be made, Bay Ridge and Brooklyn must do their fair share. And this is as good a time as any to rethink some routes, such as the M train and the X27 bus that were never properly thought out.

Every route must be justified, and we can't tolerate buses or trains that run empty on a regular basis. But, even in the context of budget cuts, a smart administration should be able to add new routes such as the Chambers Street special that remedy long standing flaws in the system.

The Chambers Street Special: I remember that one from high school. Hey, if it works, I'll all in favor.

My issue is not with the cutting of the W, it's that they want to make the N local in Manhattan to replace it. So, living in Bay Ridge and working near Penn Station, I have 3 choices, all of which will extend my commute by at least 20 minutes:

I can change to the N at 59th, go express through Brooklyn and over the Manhattan Bridge, and then local through Manhattan

or I can take the R to the N at 59th, and endure the ludicrous transfer to the Q at Atlantic/Pacific and then get to go express to work

If there's little enough need for the W that the entire line can be cut, CUT IT. I understand extending the Q into Queens to replace W service there, but to increase the commute time and frustration of thousands of Brooklyn residents every day in order to placate Queens residents seems unfair and ineffectual.

I missed that they were going to change the N to a local in Manhattan- for which hours?

This makes no sense at all- the ( crowded, very popular ) N train is one of the lines that currently works well. It should not be cut back to a local- that will drive people from the system.

And, the N train, which runs frequently, is more than enough to serve Astoria. I take those trains out there sometimes.

It appears that the Queens politicians have far more muscle than the Brooklyn ones do if any consideration is being given to routing the Q to Astoria while impairing all the Brooklyn services.

I totally agree about the 3rd Avenue bus route. Honestly, I think that if more people knew about it (at least here, in Sunset), it would get more use. Since its route in SP is pretty desolate, many people use the 5th Avenue route because they don't hang out or walk along 3rd Ave to see the bus. I love taking it because it's quicker (usually) and more empty. It should get more use.

As with Erika, I also hate the idea of making the N local. It's one of the few advantages of being on the N/R line!

I just saw your blog for the first time. It looks sharp, and I will link to it.

The Third Avenue bus is a really good option for anyone going from Bay Ridge to downtown Brooklyn, or any intermediate combination.

The idea of eliminating it is idiotic. It's important, and it has a good following, and it links several Brooklyn neighborhoods together.

Please speak to your politicians and hammer this issue on your site.

Happy Thanksgiving Phantom! Hope you're having a wonderful day.

Are you absolutely certain that the B-37 is going to be cut? I read that in a local Brklyn paper, but it seems to me that the NYTimes reported that only the X-37was going to be eliminated, but there will be service cutbacks in the B-37.

The B-37 is on a busy route so I don't see how the MTA can justify eliminating this service.

I've seen the possible elimination of the B37 in some articles but not in others dealing with the larger mass transit issue.

I rode the B37 yesterday, and a passenger was discussing the possibility with the driver. The driver said " There's no way they'll cut this line as crowded as it gets, especially in rush hour"

I have to disagree with some of what you said on the X27/37. I used to take it and there are a lot of locals that switch to the B37 at 3rd Ave. Otherwise and excellent take on the cuts. Cutting the B37 would be a travesty.

To run the "N" as a local is rediculous. The "W" and "M" trains are a stop gap measure to provide better service on the "R" line for those who reside in the city. Bad enough that we have the Owl's Head Sewage plant here to treat effluence from the Upper East Side, that we should also have to suffer bad transit service in their behalf too.

ERIKA, you are facing the same choices (albeit not as bad) as riders in off-peak and overnight hours have had to face for years. You can switch across the platform at DeKalb for the "Q" rather than going through the labyrinth of tunnels at Atlantic/Pacific to get to it.

If the already bad service which we've had here for decades continues to decline, I am looking to leave Bay Ridge. I've lived here for nearly 3 decades and we've never had adequate, let alone decent transit service. If the economy continues to tank, and apartments get to be more affordable, I may just find it easier to move than continue to put up with the city's constant victimization of Bay Ridge residence.

I did not know either that the N was going local - that's the one advantage of commuting from Bay Ridge. My commute will be extended by 20-30 minutes. Unbelievable. Don't Bay Ridge residents pay enought taxes to at least merit a decent commute?

As for the x27 - I like to take it home later in the evening, cheaper than a cab - Can it run on third ave so more people use it?

Will there be a neighborhood hearing about the cuts? Is anyone open to the valid suggestions people are making?