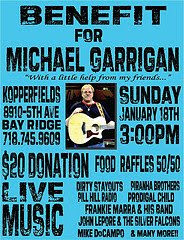 Legendary local singer and guitar player Michael Garrigan passed away on December 31, 2008 due to major heart complications. He was 58.

Called affectionately Beefboy, a nickname given to him by Jon Bon Jovi, he will be missed by his many friends in Bay Ridge.

Mike played locally for many years. Recently, he was diagnosed with heart problems and was told he needed a pacemaker. His friends decided to host a benefit to help offset some of the medical expenses. That event was to take place on Sunday,January 18, at Kopperfields. The event will still take place. said Frankie Marra, friend and fellow musician, It will be a memorial concert now with donations going to pay funeral costs.

The benefit will run from 3 p.m. until midnight, and bands already committed are Frankie Marra & His Band, Prodigal Child, John Lepore & The Silver Falcons, Mike DoCampo, Piranha Brothers, Pill Hill Radio and the DirtyStayouts. The cost is $20 per person.

Garrigan releasedhis first record in 1968. The tune was named Night Time Music and the band was Majic Ship. Mike and the band released four more singles and one album. They hit number two on New York's WPTR radio charts with their second single,Hummin.

Garrigan had been an opening act for such names as Edgar Winter, Procul Harum, Black Oak Arkansas, and the Guess Who. In 1999, while living in Santa Monica, Mike reunited with Tom Nikosey from Majic Ship and released the CD, Songwaves on Gearfab Records. While recording CD, Mike called on a few friends in the industry for help with the record, including a very special guest, Cher.

In 2002 Mike played guitar for for Cher on her farewell tour. The tour lasted 3 years. During that run he was thrilled to perform at his hometown venue, Madison Square Garden. Six times.Mike has toured the world with Bon Jovi, Chicago, The Beach Boys, REO Speedwagon and Stevie Nicks.

Garrigan had been playing the Bay Ridge circuit most recently with Mike DoCampo. If you wouldlike to make a donation in Mike's name, contact Joseph Schirripa c/o Kopperfield's Bar, 8910 5th Avenue, Brooklyn,11209 whose phone number is 718-745-9609.

City worker Gennaro Montello's final thoughts were with his beloved children after a giant conveyor belt fell on him at Owl's Head Pollution Plant on Friday : "Tell my kids I love them," the 45-year-old whispered as he was rushed to the hospital. More about a terrible incident at Owl's Head from NY Daily News

Newfound baby found at 316 68th Street today. Expect to see this in the papers tomorrow. I saw NYPD and TV News vehicles in front of the building this evening. A newborn was left alone and you will soon learn a lot more about this.

Brooklyn for Peace is doing a protest this Wednesday at Borough Hall against Israel's invasion of Gaza.

Don't remember the lads doing much protesting when Hamas was firing missiles into south Israel for months and years.

If someone was launching missiles into Bay Ridge, I'd want the federal government to stop it.

Israel " occupies " the moral high ground here.
Posted by The Phantom at 11:18 PM

Wow sorry to hear about his death, to play with all them groups and the Frankie Marra and his Band in Bat Ridge. Bay Ridge will never sound the same after this.

Israel has the moral high ground when 4 of its civilians die and then then they murder 1000 Palestinians using U.S. weapons and prevent humanitarian relief from enter Gaza?

Mike was the best! Lots of fun to be with.
cs