New York City Does Not Follow its Own Law 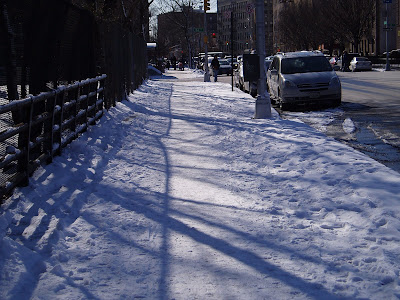 I am away in the wonderful city of London until Sunday morning.
But the long arm of the law is keeping an eye on the New York City government, which not only does not enforce the requirement that landlords shovel snow in front of their buildings - it does not shovel the snow on property that the city itself owns.
Here, courtesy the Kong, is a photo taken on Wednesday at the overpass by 84th Street and Seventh Avenue. Tuesday's snow has not been shoveled, and is hard packed from walkers.
It had not been shoveled on Thursday either.
London dodged a bullet last night and today. There was major snow in England and Wales, but it went north of here. I missed what could have been a nice show.
Posted by The Phantom at 9:40 AM

Snow is not required to be shoveled until 3 hours (I think) after a storm if it's in the morning or afternoon and if it's evening and overnight they have til 11AM.
You can call and report it to 3-1-1 the next day of a storm.

Nice picture, is the Kong for hire?