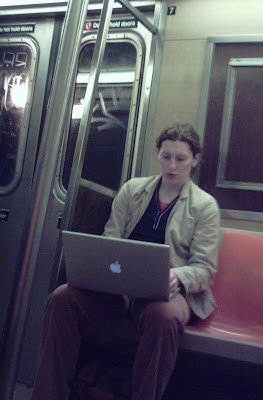 Real Bay Ridge people take the subway at all hours of the day and night!

The Center for an Urban Future sent us a report the other day that shows that ridership broken down by subway station- very interesting for us geeks with an interest in mass transit.

Subway ridership is way up compared with a decade ago. I think that this is due to the Giuliani/Maple/Bratton leadership which essentially lowered crime rates beyond all recognition, and by improvements in the system from the bad old days.

Much of the increased ridership is in Brooklyn.

But let's look at some of the statistics in Bay Ridge and Sunset Park on the R line, showing average weekday ridership by station for 2008, and how this ridership compares with that of 1998:

People in Bay Ridge have voted with their feet, and they vote for more mass transit. We cannot let the service on the R, N, D or any other subway lines regress to the bad old Abe Beame days.

See the original press release, and a link to the interesting source material, below.

March 9, 2009 – The Center for an Urban Future, a nonpartisan think tank based in New York City, today published a study which reveals that Brooklyn was home to 51 of the 111 subway stations that experienced an increase in ridership of 50 percent or more between 1998 and 2008. The report also shows that bus ridership in Brooklyn increased by 21.9 percent between 1998 and 2008, dwarfing the 7.6 percent growth rate for Manhattan during the same period.

Overall, the Center’s study found that the largest gains in transit ridership over the past decade occurred at subway stations and on bus routes located in the boroughs outside of Manhattan. The Center’s analysis, which documents the percentage increase in weekday ridership for every subway station in the system between 1998 and 2008 as well as the growth in daily bus ridership by borough, highlights just how important the city’s public transportation system has become for residents living outside of Manhattan. And it comes at a time when the MTA is planning to make a series of devastating service cutbacks on bus and subway lines outside of Manhattan and as some outer-borough legislators are opposing new tolls on the bridges as a way to prevent the transit cuts.


The Center’s findings include:

· 20 of the 22 stations with the largest percentage increase in average weekday subway ridership between 1998 and 2008 were either in the outer boroughs or in Manhattan north of 96th Street.

· More than a quarter of all New York City subway stations—111 out of 425—saw an increase in average weekday ridership of 50 percent or more between 1998 and 2008. Brooklyn accounted for nearly half (51) of those stations; there were 28 in Manhattan, 20 in the Bronx and 12 in Queens.

· Overall, 82 percent of the citywide gain in bus ridership between 1998 and 2008 occurred in the boroughs outside of Manhattan.

The Center’s analysis, which is based on data from MTA New York City Transit, is the latest issue of New York by the Numbers, the Center for an Urban Future’s monthly economic snapshot of the five boroughs.

Last month, the Center published a major report about the challenges facing New York City’s middle class which argued that rising commuting times and overcrowded subways have already become a key quality of life issue for many residents living in the boroughs outside of Manhattan. This new data makes a strong case that these residents should be seeing an improvement in transit service rather than a dramatic cut—and it suggests that elected officials representing neighborhoods in Staten Island, Brooklyn, Queens and the Bronx would be well-served to pay as much or more attention to their transit-riding constituents as to the relative handful of car drivers into Manhattan.

The new study is available here
Posted by The Phantom at 11:45 PM

BRBlogger says - "Subway ridership is way up compared with a decade ago. I think that this is due to the Giuliani/Maple/Bratton leadership which essentially lowered crime rates beyond all recognition, and by improvements in the system from the bad old days."

Enough with the nostalgia! Rudy left office eight (8) years ago.
I attribute the increase to system improvements - less crowding, more reliable service, fewer breakdowns.
As for Bay Ridge: Its population has increased significantly since 1998, and it has become progressively less neighborhood-centric -- esp. as Manhattan rents increased, and more people moved here but worked in Manhattan.

And regardless of subway quality, many people don't have a transit choice. Only 45% or so of Brooklynites own a car, not everyone can kayak or bike to Manhattan, and you have to get to work SOMEHOW.

Its not nostalgia, it's fact - I lived through the pre Rudy era, and through it, and after it.

Especially when you have those who try to rewrite history, ( " Dinkins solved the crime problem " ) we must keep focused not only what happened by why.

That was not the case pre Rudy. Fact.

I think that most people always did work in Manhattan. And that a lot of the difference is that since they no longer are afraid, they take the train all the time in the late hours or on the weekend. That was not the case for many people in the 70s and 80s.

"I think that most people always did work in Manhattan. And that a lot of the difference is that since they no longer are afraid, they take the train all the time in the late hours or on the weekend. "

I also do _not_ miss Rudy, and think that numerous non-Rudy factors account for ridership increases.

I've ridden trains at all ungodly hours for decades. I still rarely see cops outside of major stations [where I saw them even before Rudy], and there are more TA-unmanned entrances. However, the trains are cleaner and better, and many stations were brightened up or renovated, with better sightlines and lighting and fewer cul-de-sacs [a plan that began before Giuliani] so it feels friendlier, brighter, and less like dropping into a grubby pit.

Community activism also helped by improving areas _around_ the stations, via BIDs and civic groups. So did boom-years construction, plus renewal of formerly iffy neighborhoods by immigrants, other newcomers, and younger folks in search of affordability. The new busyness spilled over into the subway stations.

So no, I don't think that subway and bus ridership increased in 1998-2008 because of one guy whose mayoralty ended in January '01. It's due to a mix of factors, including infrastructure improvements, busyness-spillover from revived or newly-hip neighborhoods, and more people and different mixes thereof.

Also: Ridership at the eight Bay Ridge R stations (36-95th) did increase by around 20,000 per weekday in '98-'08 - but I _seriously_ doubt that these 20k people would otherwise stay home, could all afford a car or daily car service, or moved here because the subway is so swell.
Populations increase, people do what they have to, and subway use often differs by age, gender, job, et al. So to draw real conclusions, you'd have to check '98-'08 ridership increase vs. neighborhood population _and_ demographic changes.

The trains are cleaner and better - but that was part of the MTA's own " broken windows " policy of removing graffiti-ruined cars from service.

The late and great police thinker
Jack Maple influenced Rudy and Bratton, and he influenced the MTA too I think. He is not often mentioned, but his thought is at the root of the historic, and seemingly permanent, crime drop in this city.

Has Bay Ridge's population increased? I see no evidence of that. There are more cars, but I see little evidence of more people.

I notice far few uniformed police than in the old days, esp in the day. But that's not a problem. There are many more plainclothes cops.

I always took the train at any hour, but I definitely notice more people in the late hours than ever before. Its been a virtuous cycle - since people aren't afraid anymore, they hang out much later, and do not worry about the time so much.

The Phantom said: "I definitely notice more people in the late hours than ever before. Its been a virtuous cycle - since people aren't afraid anymore, they hang out much later, and do not worry about the time so much."

It depends on how you define "late hours," and where you go.
Personally, I don't see any significant late-pm increase, outside of under-30s and neo-hipsters [and younger people tend to be more subway-ish and less wary], late-night-worker mostly-immigrants [who probably can't choose their hours or transit mode], and tourists [who began to pour in after 9/11, regardless of safety] ... and it depends on specific area or line.
But this is all anecdotal anyway.

Also, the overall ridership increase "mainly occurred during the first half of 2008 when gasoline ran over $4 dollars a gallon. The spike in ridership tapered off as gas prices fell and the economy spun downward. Other factors in the increase were tourism and new residential developments."
http://www.newsday.com/news/local/wire/newyork/ny-bc-ny--transitridership0222feb22,0,6638884.story

The denouement is that "[j]ust a day after announcing 2008's soaring rider total, Metropolitan Transportation Authority officials said Monday that average weekday subway ridership dropped by 2 percent last month, compared to January 2008 ...
"It was the first such decline in five years that wasn't attributed to bad weather or an unusual number of weekday holidays."
http://www.1010wins.com/NYC-Subway-Ridership-Drops-after-Soaring-in-2008/3903808

So they have a new reason to hike fares or cut service.

This increase can be reflective from the economy struggling with high gas prices and people losing jobs and having to tighten their budget. Subways systems and mas commuting helps eliminate some of the costs.

"This increase can be reflective from the economy struggling with high gas prices and people losing jobs and having to tighten their budget."

Yes, but then the TA said the % of riders DROPPED by a big 2 % this January, when the economy spun into the drain, instead of just circling it.
That could indicate layoffs, cutbacks, plus people moving away.