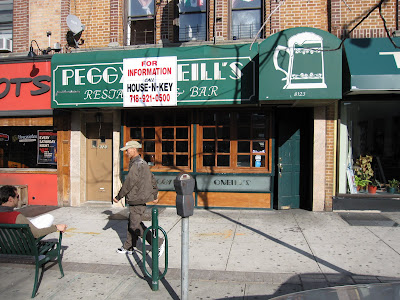 Peggy O'Neill's has been a Bay Ridge mainstay since the Koch administration.

It used to be a gold mine, a genuine Irish pub/restaurant attracting crowds from 18 to 80, and ( good ) live music most nights. It attracted plenty of people from all parts of Brooklyn, Staten Island and points further afield.

It was jam packed on Friday and Saturday nights, and did well the other days as well.

I think that there were ownership changes over time, and at various times they messed with a formula that should never have been tampered with. The restaurant service went away, then the bands weren't the same, and before long it wasn't Peggy's any more. There was no reason to go there anymore.

Peggy's should be still open and prospering. This is an example of bar owner's malpractice. I don't want to hear about the bad economy or demographic changes. They killed their own gold mine by messing with it. Shame.

---
We have a report that at about 9pm tonight the door to Peggy's was open, and that there were four NYPD cars outside, lights blazing. Something was going on.

Took a walk down 69th Street, to the projected site of the new Key Food. No signs of any progress. I don't care what they told City Councilman Gentile. Something's wrong.

See some comments on Councilman Gentile's website including comments from angry and suspicious neighbors.

What the hell is going on? Everyone wants this thing to succeed, but nothing is happening and nothing has been happening for a very long time.
Posted by The Phantom at 7:58 PM

I was there tonight(the real Peggy's or if you want to go back Daisey's) the Cops didn't find anyone or a thing. But the cops don't know all the hiding places. Bring back Glenn Roes.

Was Peggy's shut down because police where there last night?

Or is Peggy's going out of business?

It's been observed that they've gone out of business --after it was noticed that the police were in there. Do not know the story. Will try to find out.

The phone number at the Bay Ridge Peggy's does not work

The Key Food construction permit situation still not squared away.

Projected store opening is sometime in June, they are told.

SO many good memories there. :(

The guy who answered the phone would only confirm that the Bay Ridge location had closed, but claimed to have no information as to why.

Peggy O'Neill's in Brooklyn was sold a few years ago and turned into an underage bar. I'm surprised it lasted this long. It's original location was next door where Bullshots is located.

Get rid of Jaba or buy him a drink!!

I'm glad Peggy's closed. It used to attract locals who met there for a drink, food and good music. Over the last couple of years they started catering to the young hip hop crowd. These kids always had fights, disrespected the neighborhood and would take drugs (I live near Peggy's and had seen all of this).
Goodbye Peggy's.

Much good detail on Peggy's was to be found on Bay Ridge TalkThe place changed locations, and it changed owners, and the place apparently was never the same.

It sounds though it was a good thing that this newer, fake, Peggy's shut down.

Pity. The real Peggy's was a fine place.