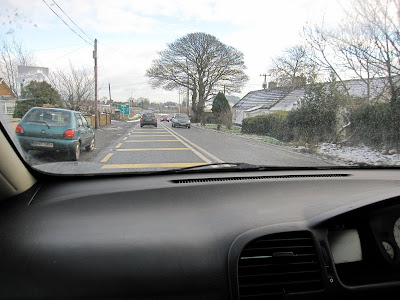 Work meant that I was going to be in London this past Monday. I was with a major client, meeting with four insurance companies not far from Liverpool Street station.

I decided to take a side trip. I flew into Belfast, so I could have a couple of days in Ireland before I went to London.

I flew the Continental Airlines nonstop from Newark to Belfast. 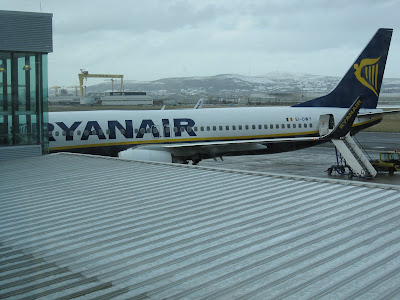 Ryanair at Belfast City, with the famous Harland and Wolff shipyards in the background.

On Day One, I made my way from Belfast International Airport down to Co. Monaghan where I met up with relatives that I'd not seen in way too long a time. In between conversation, we watched BBC and RTE accounts of an overhyped snow storm, which had half everyone in the islands hiding under the bed and muttering about " grit " shortages. 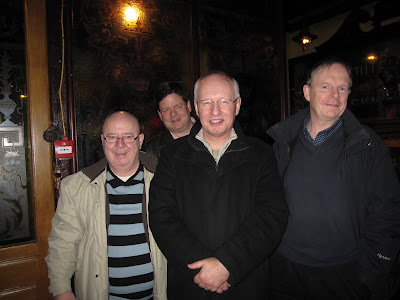 At the Crown Bar.

On Saturday, I was given a ride up to Belfast. I stayed at the Europa Hotel, which was bombed many times during the bad old days. It's a good hotel, right in the middle of town, and a good value - a superior double cost me $120 US.

The Beer Summit was right across the street at the historic Crown Bar, lovely and as comfortable as an old shoe.

Here, we see Gerard, some guy in the back, the famous David Vance, and Peter, who was as sensible in person as he is in print. G was a shy subject but an excellent photographer. I'd tell you what we spoke of, but what happens in Belfast stays in Belfast I always say.

I flew out of Belfast's City Airport, a small facility much closer to town than the larger Belfast International. It's just right for Ryanair, with whom I flew to London Stansted. In an airport like this, there are no delays. The plane lands, heads right to the gate. Two minutes later, the passengers are streaming out of the plane. There are no delays, and turnarounds are very fast.

The Ryanair cabin is cramped and no frills unless you're willing pay for them, but they stick to a schedule and the flights are cheap and cheerful. I flew to London for $68, including all charges including the one for the checked bag. I will fly Ryanair again, and I hope to see London and maybe Ireland again in February.
Posted by The Phantom at 10:29 PM