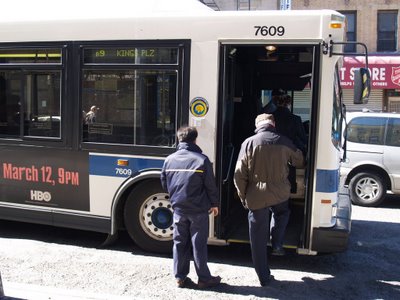 Next year, you'll have to catch this bus on Fourth Avenue.

The Bay Ridge Courier reports that the B9 bus will change it's route before the end of the year.

When it comes down 60th Street from Kings Plaza, it will take the left turn on Fourth Avenue, not Third, and will proceed along Fourth until 69th Street ( Bay Ridge Avenue ) where it will take a right turn down to Shore Road.

This re-routing could be a major problem for this part of Bay Ridge. I could easily see them deciding to create a new bus stop for the eastbound ( Kings Plaza ) bound bus, which could mean a loss of four or five parking spots in a neighborhood with too few of them as it is. The City had better find a way not to confiscate parking spots, or to make up the difference, that's what I say.

I take this bus every so often, so the rerouting can be a minor convenience for me as a bus passenger--the Fourth Avenue stop is closer to home--and it makes sense to have an easier connection between this bus and the R train. But don't mess with the parking, boys.

So, why do two buses ( the B9 and the B1 ) end at the 69th Street pier, not exactly a transit hub? I thought about it a while back, and figured it out. What say you?
Posted by The Phantom at 9:39 PM

Shopping the cheap battery,you can see from here.