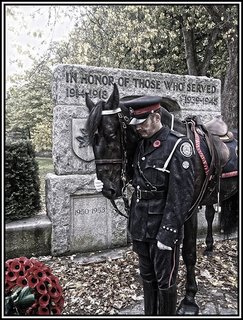 (Photo by torontofotobug on flickr, from a poster she made for the Toronto Police Mounted Unit for Remembrance Day.

On this anniversary, Britain, Canada, Australia and much of Ireland remember the great fallen as they commemorate Remembrance Day. I was just in London, where many wore paper poppies , evoking the flowers that grow on Flanders' fields, where so many fell.

The US commemorates this day as Veterans Day. But we don't think of the meaning of the day the way our friends overseas do.

Let's remember all of those who have served, and all those who fell. In the war to end all wars, and all the wars we've had since.

Below, the words of The Green Fields of France. The version by the Furey Brothers is unforgettable.

Well how do you do, Private William McBride
Do you mind if I sit here down by your grave side?
A rest for awhile in the warm summer sun,
I've been walking all day and I'm nearly done.
And I see by your gravestone that you were only 19
when you joined the glorious fallen in 1916.
Well, I hope you died quick and I hope you died clean
Or, William McBride, was it slow and obscene?

CHORUS:
Did they beat the drum slowly?
did they sound the pipes lowly?
Did the rifles fire o'er ye as they lowered you down?
Did the bugle sing 'The Last Post' in chorus?
Did the pipes play 'The Flowers o' the Forest'?

And did you leave a wife or a sweetheart behind?
In some loyal heart is your memory enshrined
And though you died back in 1916
To that loyal heart are you always 19.
Or are you just a stranger without even a name
Forever enclosed behind some glass-pane
In an old photograph torn and tattered and stained
And fading to yellow in a brown leather frame?

Well, the sun it shines down on these green fields of France,
The warm wind blows gently and the red poppies dance.
The trenches are vanished now under the plough
No gas, no barbed wire, no guns firing now.
But here in this graveyard it is still No Man's Land
And the countless white crosses in mute witness stand.
To man's blind indifference to his fellow man
And a whole generation that was butchered and downed.

Did they beat the drum slowly?
did they sound the pipe lowly?
Did the rifles fire o'er ye as they lowered you down?
Did the bugle sing 'The Last Post' in chorus?
Did the pipes play 'The Flowers o' the Forest'? 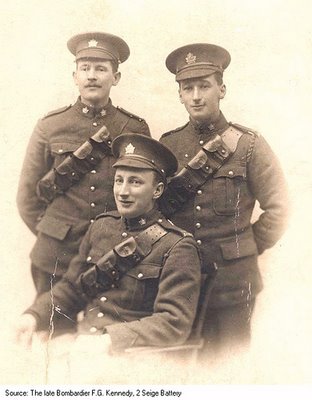 On an August day in 1915 Percy Macnevin, left, Walter Lantz, right, and Waldron VanIderstine, centre, enlisted in the 2nd Siege Battery the first Prince Edward Island unit to fight in the First World War. With a range of ages and occupations, they made an odd trio. Macnevin, at 28, the oldest of the three, worked as a machinist with the railroad. VanIderstine was an assistant accountant with the Bank of Nova Scotia. Lantz, the youngest, was fresh out of Prince Of Wales College and trying his hand at fox farming when the war broke out. Whether they knew each other before that day, they were certainly good friends by the time this photo was taken, shortly before the unit shipped overseas in November 1915. The 2nd Siege fought almost continuously on the Western Front from the summer of 1916 until the last day of the war. By then, only one of the three was still alive. Lantz was killed in action on 12 July, 1916 -- just a few weeks after the Battery went into action. VanIderstine died a year later from a case of pneumonia he contracted in the trenches. Promoted twice and decorated for bravery, Macnevin came home with the Battery in May 1919. He went on after the war to become a Colonel in the militia artillery.

[The photo and text above appeared in Prince Edward Island's "The Guardian" under the title Archive of the Month. I can' t remember exactly when, but it was probably 2001 or 2002]
( From flickr, posted by freelantz
Posted by The Phantom at 11:13 AM

Have a listen to the Remembrance podcast on iTunes or on the Royal British Legion blog. It's a good way to remember.

Those who put themselves on the line during the Great War ought to remembered for the bravery and honour which they displayed.

Some modern day people of feeble mind may wish to engage in revisionist historical 'analyis' from the comfort of their one-man bedsit and thus criticise these men, but those of us with any knowledge of fact remain unperturbed by their infantile ramblings.