Where Have You Gone, Phil Rizzuto? 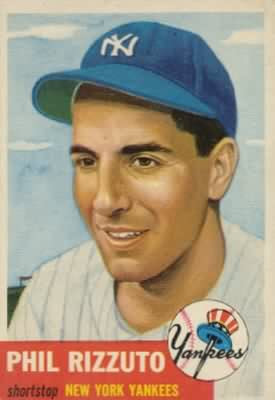 Ah, Christ. I checked the headlines today when the plane touched down from Beijing, saw "Phil Rizzuto", and knew right away what it was. Phil Rizzuto, at the age of 89 years, was dead.

I never saw Rizzuto when he played a great shortstop for the championship Yankees teams of the 1940s and fifties.

Like any modern era NY sports fan, I remember him as the excitable, over the top "Voice of the Yankees" on their radio and TV broadcasts. He wasn't the most professional announcer --there were long stretches when the game was the last thing he'd be speaking of --but he was such fun.

In the late 1980s, I went to One World Trade Center for a short business meeting. As I entered the elevator for the trip back down to the lobby, who do I see in the car but Phil Rizzuto?

I introduced myself, we shook hands. I mentioned that I was from Bay Ridge, and the Brooklyn-born Phil said "Yes, I used to work near there. At the Bush Terminal".

So, while he'll be remembered as an announcer, for the guest appearance on Meat Loaf's "Paradise By The Dashboard Light", as a champion baseball player with seven World Series rings, I'll remember him as someone who was friendly to me in a chance encounter maybe twenty years ago.

I'm just back from China, which was fun. But as always, the best thing about going on vacation is the coming back. This year is different, in the aftermath of the tornado damage. There's a policeman standing watch tonight over a number of damaged buildings on 68th Street. Tomorrow, I'll try to take stock.
Posted by The Phantom at 11:04 PM

Phil was a classic player (and like many of his time lost playing time for the service). I enjoyed listening to him broadcast the Yankee games and recall one night where Lou Pinella was screaming at an ump, and Phil noted "What a night for the lip readers."

Aside from Thurman Munson, this was the saddest death of a sports player to me. I will never forget sitting in the kitchen on hot summer nights listening to the radio and how excited Phil Rizzuto would get, screaming, "Holy Cow!"

You were braver than me to shake his hand when you met him...I was too nervous but my friend whom you remember...Meryl Campbell said hi to him. --Joan

I didn't know that you'd met him.

All the local papers were filled with stories about how --genuinely-- nice he was. He kept up with lots of the little people over many years, couldn't do enough for them.

One of the papers said his approach to broadcasting was as if every game was the first game he ever saw!

If you've not seen this, it's highly recommended. There are other Phil Rizzuto things on youtube, including the Money Store commercial, and his mention on Seinfeld.