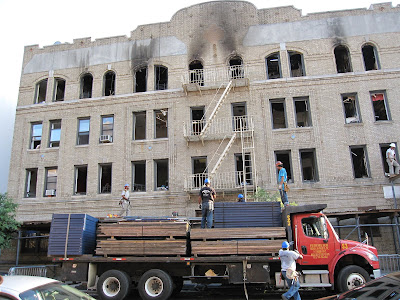 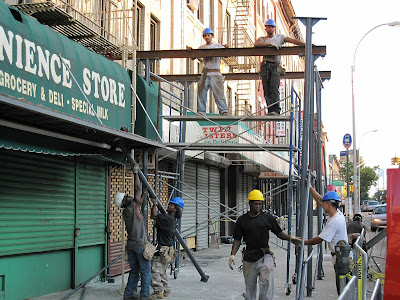 The fire began about 1130 Wednesday night, and wasn't put out until nearly 3am.

Amazingly, everyone in each of the sixteen apartments got out. The Red Cross took good care of them.

It was a four alarm fire. That would mean Engine Company 241 and Ladder Company 109 from just down Third Avenue, along with the guys from three other firehouses.

There were 14 injuries - 12 to firemen, two to residents.

The Sunnydale Farms deli has been at this location since the 1970s. I worked there over 30 years ago, along with a bunch of troublemakers. It was owned by John Bae, from Korea. It had been owned by different Korean families ever since. I've shopped there hundreds and hundreds of times. It was a clean and friendly place, just what you want on your block. 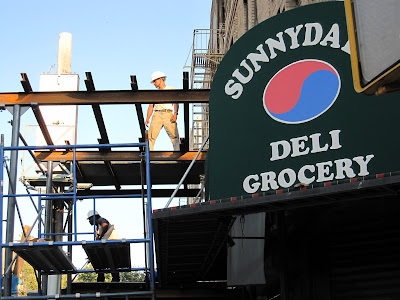 I knew the current owners by sight. They normally closed at eleven. So, last night, they would have left right before the fire started. They came by today. As you might expect, they were devastated.

At seven tonight, scaffolding was being put up around the building.

I hope that they can find a way to save the structure. And that the residents find new apartments that they like. And that Sunnydale Farms reopens soon, in a place very close to the corner of 68th Street and Third Avenue.

FromNews 12 Brooklyn including a video interview with Sunnydale owner Sung Ho.
Posted by The Phantom at 8:29 PM

Thank you for the shout-out to the Red Cross. I was off duty but I know a bunch of other response volunteers were called in.

That link to Channel 12 news was interesting because the owner of the deli said that when he unlocked his deli he saw smoke pouring into the deli from the hair salon next door.

I believe the other news reports theorized that the fire started in the deli as a result of a wire shortage related to recent flooding in the building.

Is there any way to obtain the results of the FDNY's investigation of this fire? I'm thinking that just calling the local fire station won't do it.

Might be a good idea to speak to City Councilman Gentile's office. Ohterwise the city will give us the runaround.

They do not know what the cause is, not yet anyway.

I also asked if the building could be refurbished ( saved ). They don't know and speculated that this was probably up to the owner.

Based on the deli owner's report, the fire most likely began in the hair salon not the deli. If that was the case, the trajectory of the fire seemed kind of strange for starting in the salon, but for a layman it's hard to say.

The building didn't seem to be particularly well maintained. Don't know if this was a Section 8 building like the one catty-corner across the street from it.

For those who did not see it, there was good cover of this on Bay Ridge Talk