Why I'm Leaving the Republican Party

These days, the Republican Party doesn't stand for very much. And I don't like some of the things that it stands for.

Today, a bill sponsored by South Dakota's Republican Senator John Thune came within two votes of largely overriding state laws restricting the right to carry concealed firearms. Basically, someone who had the right to " carry " in North Carolina would by virtue of this law be given the right to carry that concealed weapon even when visiting states like my own state of New York. A state which requires, but rarely grants, permits in order to carry hidden firearms.

New York has had sensible restrictions on weapons since 1911, when the Sulliaan Law was passed. They're a major reason why New York City is the safest big city in America, and why New York State has lower violent crime rates than the large states with loose rules on who can carry a firearm in public.

These laws are immensely popular around here, among both Democrats and Republicans.

Today, Senator Thune essentially pulled a gun on the populations of New York, New Jersey, California, Massachusetts and a number of other states. The Republicans talk a good game about local control and states rights, but, here, the citizenry in the Northeast / West Coast / urban Midwest were told that their views don't count at all.

Senator McCain shamed himself by voting for this bill. Senator Spector, the new Democrat from Pennsylvania voted against it. Specter may have been the deciding vote on this, as some Democratic senators - Reed, Feingold, probably voted against their conscience for tactical and political reasons. But, no doubt about it - this was a Republican shot at the heart of responsible gun control and the right of states to reflect the wishes on this issue.

States like New York would no longer have any real right to tailor gun laws to local needs. They could presumably have controls on their own citizens, but not on the millions of out of state residents who pass through. That's ludicrous and irresponsible.

This is one of the more divisive issues in America now. You might think that a good solution would have Texas values prevail in Texas, while the values of New York apply in New York. Not according to the Republican Party. The views of urban America on these matters are not to be taken into account.

The Sullivan Law has been around for nearly a century, and now they decide to go after it.

I've had some serious problems with the Republican Party over the past decade, over budgetary and some other issues. But here, they're attacking my rights and the rights of my city and state to maintain the level of safety we've enjoyed. 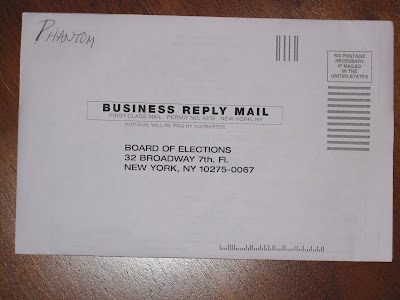 Since the Republicans appararently don't stand for much, and since they don't respect my rights, I'm going to fire a shot right back at them. In tomorrow morning's mail will be a signed " change of party " form to the NY Board of Elections. I'm leaving the Republican Party. I won't be going to the Democrats - there's nothing there for me. As soon as the paperwork is processed, I will officially be an " independent " - allied to no party.


To paraphrase what President Reagan said about the Democrats: I didn't leave the Republicans. The Republican Party left me.
Posted by The Phantom at 8:37 PM

That sound like a REAL bleeding heart liberal. Try that party.

With all that is currently going on in the world today - two wars being fought, a recession that is crippling millions, a healthcare crisis, global security being threatened by nuke-crazy regimes, etc. -- and this the best legislation the Republicans can come up with!!!

I'm with you, Phantom. The GOP now stands for government OVER people. I'll be sending in my change party to the BOE as well.

Thanks for the kick in the pants!

And again none of this is meant to be an endorsement of the Democrats.

( my comments are part of a thread on A Tangled Web )

WOW strong post and you actually filled out the forms to leave the party.

So now that I am joining you in Bay Ridge, we can discuss Independent....er I mean Liberal topics :)

Oh, I am NOT endorsing the Dems. They are just as clueless and dim-witted as the GOP.

I would love to see a truly Independent party. A center acting/thinking party who doesn't see the government as the answer to all their problems.

Oh, Phantom, your comment about Obama's comment on the Gates incident is right on. You'd think someone who's supposed to be so politically savvy would know enough to keep his mouth shut!

Of course the media ran with it. They needed something to talk about since the Michael Jackson autopsy is still pending.

Good for you Phantom! Both parties are now part of the problem not part of the solution. Given all the chaos and dysfunction in the Mets organization, any chance you'll switch your allegiance from the Mets to the Yankees?

It just shows you,The Mets and Liberals........ I can't believe, The Phantom is a Met fan! But I forgot, you changed parties too. Long live the NRA. Lets start a Independent Liberal Party. A Liberal that makes sence.

You sir, are a liberal. Enjoy your new status!

P.S. Why was I blesss with this musical talent?

Good for you, Phantom.
I wish you'd join the Democrats, but leaving the GOP is a good first step.