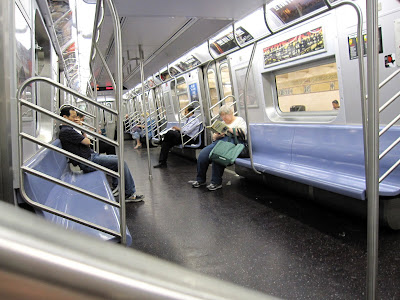 On midnight, Friday June 25, a number of changes will take place in NYC bus and subway service. Some routes will be eliminated, others will be altered, some will see frequency of service reduced.

But how will this impact Bay Ridge?

Lets look at the subways first. And to properly look at this, we need to look at the M train and the W, which don't serve Bay Ridge.

I believe that the changes will be as follows:
The W train wasn't heavily used, and at times, the W trains would bunch up approaching Whitehall Street, causing delays for us R train riders. But it did take some passengers who otherwise would take the R train. Without the W, the R train will be more crowded in Manhattan.

The M train has never made sense in this part of Brooklyn. It had a very low ridership - the one line on the subway system where you could always get a seat on rush hour. I take it a lot, and would refer to it as my " private limo " - more than once, it I've taken the last M train to Brooklyn at around 704pm, I'd be the only passenger in the car. I will miss my private limo, but it makes sense to get rid of the M train to this part of Brooklyn.

The loss of the N express in Manhattan is really bad. Since the Sea Beach line was fully restored some years back, it's been one of the best lines in the city, a great service for Bay Ridge and Sunset Park riders. Now that its not an express in the city, we've lost something.

The R train? Well, lets just say the Fourth Avenue Local will be more crowded during peak hours. Especially as of Whitehall Street going into work, when the Staten Island commuters get on board. There will be no more W train to take the pressure off.

These changes have not been fully explained by the MTA. There are posters in the subway stations explaining some aspects of the changes - you should check them out. If I've made any errors above, please set me straight.

Tomorrow- how the Third Avenue bus and other bus changes will affect Bay Ridge.

The N train will likely pick up the slack that the W had because it's now running local. Expect both to be more crowded, but it's not as if everyone on the W will now be on the R.

ALL changes are VERY clearly explained - do check their website.

I have no idea if the M ever made sense in this area but with the R already becoming noticeably more crowded the last couple years, it'll be interesting to see what happens when Sunset Park's rush hour service is cut in half.

The M would have served a whole lot more people if it had gone to 95th St.

The route to Bay Parkway was already served very well at all hours by the D train.

The MTA ran it to Bay Parkway to make it easy on themselves - since at that terminus, they could just run the trains into the Coney Island yards.

Send me the link to where the MTA explains any of this clearly.

When you go " planned service changes " they only tell you about weekend disruptions.

I know that they have many things to discuss here, but they've done a horrible job making information easy to understand for the average person..

That's a link from their main page. Was it really that hard to find?

This is the most important current topic and it should be on the top of the page.

And where it says " Planned Service Changes " - where one might expect to find information about, you know, the anticipated service changes - they show something else ( weekend or late night temporary changes )

I think the "Planned Service Changes" link should remain the way it is - for temporary diversions -, but otherwise you are right - the upcoming c---------k deserves a huge banner over the top.

I have sent an email to the MTA asking them to make this change. Let's see if they respond