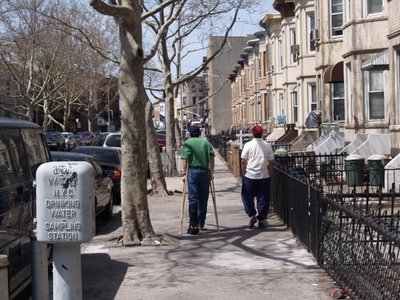 Two men walking down 69th Street, between 3rd and 4th Avenues, midday. It won't be long before you see leaves on those trees. 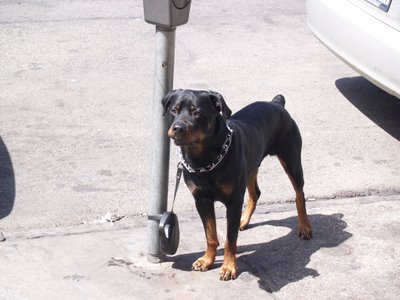 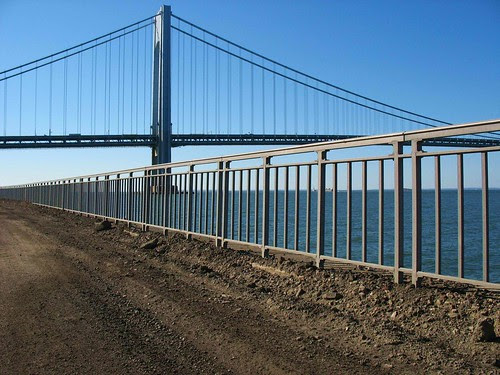 Today was a glorious day in Bay Ridge, so I decided to take out the bike and go for a ride.

Went down to the 69th Street Pier, and turned towards the bridge.

The path was in awful shape last fall, with many large potholes. Most of the section of road by the water has now been fenced off, and it looks as though repairs have begun. Closer to the Verrazano, the hurricane fence was about to be installed, and was still on its side, blocking almost all of the Belt Parkway side of the road. If it wasn't raised before sunset, some nighttime bike rider is going to take a nasty spill tonight.

Continued past the bridge. The road by Bay Parkway has been paved, so that you can ride a bike straight into the shopping area parking lot. Handy for bicyclists like me.

Went past Nellie Bly, the ancient young children's amusement area that has now been closed. I will try to take a photo of it next weekend.

Went down past Coney Island. There were lines outside Nathan's. The Cyclone roller coaster has not yet opened.

Decided to stop by Spumoni Gardens, since I was sort of in the area, and treated myself to two Sicilian slices.

Road back in a zig-zag route past the two family brick houses of Bensonhurst and Bay Ridge.
Posted by The Phantom at 11:06 PM No comments:

The fight will be held on July 4. There will also be an undercard with bouts between Eric "Butterbean" Esch of Jasper, Alabama vs Frank McGrane of parts unknown and a six rounder between female boxers Christy Martin and Terri Blair.

Tyson will have his hands full against the Ukrainian heavyweight. This may be his last chance to reclaim his status as a top contender.

Butterbean may have his hands full this time !
The matches will be seen on pay-per-view tv in the US. The Alpine will be closed for two months as the multiplex walls are taken down for this major sporting event. The Alpine is being discussed as the site of future boxing and professional wrestling events.

The Tyson-Klitschko fight is being co-sponsored by the Ring magazine and the Home Reporter and Sunset News newspaper.
Posted by The Phantom at 8:38 PM 7 comments: