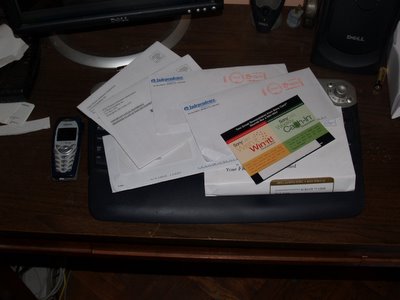 These seven pieces of First Class Mail were delivered to the wrong address ( to me ) this past Friday. Misdirected mail is a major problem in Bay Ridge, and has been a major problem for years.
Posted by The Phantom at 3:34 PM 1 comment: 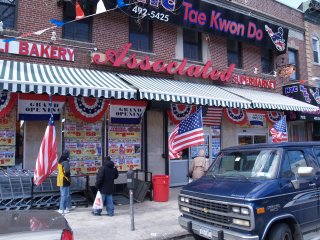 There's a new Associated Market at 7918 Third Avenue...or is it an older one that has been expanded? Anyway, I was walking by today, when I came upon it. It's two stores wide, and its bright and clean, with wide aisles to guide your carts through. Tiny by suburban standards, but a sizeable market by Bay Ridge standards. 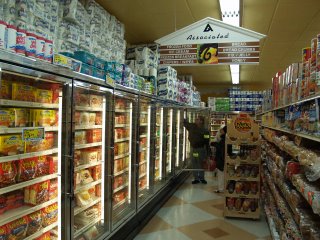 Now if only they could get a supermarket over here in the high 60s to replace the A&P that used to be here.
Posted by The Phantom at 12:05 AM 18 comments:

Like a lot of other Brooklyn residents, I am very unhappy with the DSL Internet service provided by local phone company Verizon.

Verizon promises me speeds of " up to " 3000 kbits / second download. And at times ( 3am on a Tuesday, times like that ) I actually receive such speeds. But on peak evening times it often gets slow. Very slow. Like a trickle of maple syrup from a bottle that's been in the refrigerator.

But Verizon has an 800 number to deal with technical support issues. So, over the past two years, I have called them. Often. About a year ago, when there was a big slowdown, they first blamed it on my computer, then several calls later, told me that the fault was infrastructure repairs.

Another big slowdown began two weeks ago. And again they blame it on my PC. Except that this is a relatively new computer, only 8 months old. It does everything well, other than ( allegedly ) internet access.

I have reached my wits end, and a week ago, I called Time Warner Cable to place an order for Cable Internet service. And I am giving them my phone service too. I want to punish Verizon.

On March 10, I will have Cable Internet service. We'll see if my computer is the problem!
Posted by The Phantom at 9:52 PM No comments:

Just saw this from the NY1.com. There's a link to the NY1 TV news article on this story. Lots of nice images of the venerable bowling alley. Short interviews with employees , and with Jennifer Bashara, General Manager, who would love to buy the building from Century 21 or to work out some kind of compromise.

( RealAudio needed to see video Click on the yellow button if you have broadband, blue if you have a dialup connection )
Posted by The Phantom at 11:14 PM 1 comment:

The NY Daily News reports that Leemark Lanes bowling alley may disappear by summer's end, as Century 21 wants to tear down the place and replace it with a parking lot.

Leemark Lanes has been around for 60 years. Century 21 is a great store, one of my favorite stores in all of NYC, but man...I don't want Leemark Lanes to follow Lento's and the Fortway into extinction.
Posted by The Phantom at 12:09 AM 8 comments: 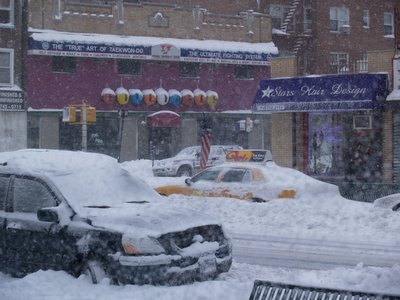 They claim this is the largest storm in NYC history, but I think that the 1996 blizzard dropped a lot more snow in Bay Ridge--and I remember much larger snowstorms in the mid-1960s. But anyway this was a big enough storm, and here's what it looked like.
Here, Ovington and Fifth Avenues, at 215pm.
( Click on photos to enlarge ) 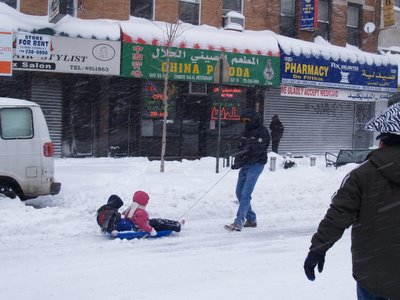 Little guys riding in style on Fifth Avenue. Their parents took them in for pizza at Elegante's. I followed them right in. Elegante had just opened, with a hot pie right out of the oven. 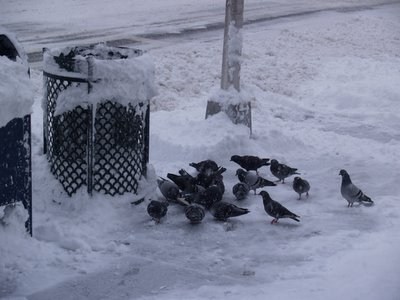 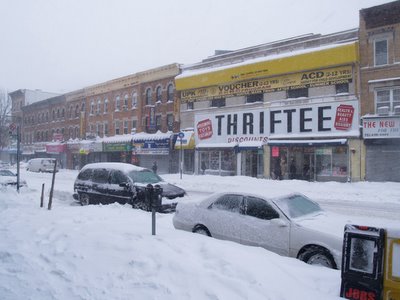 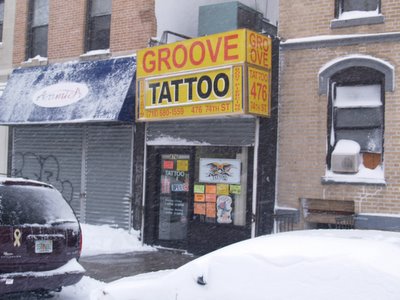 Who wants a tattoo? 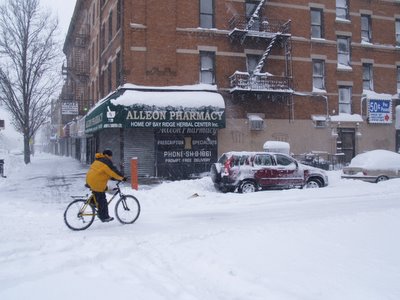 Are you really sure that this is a good idea? 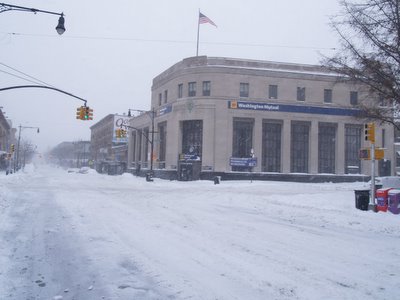 Looking north on an empty Fifth Avenue, past the Lincoln Savings Bank. 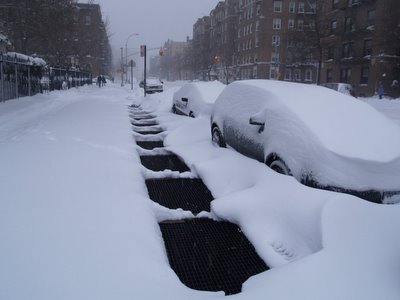 Air vents on the R subway line on Fourth Avenue. The subway was not delayed at all by the storm. I don't think that the buses were much affected either. I saw the Fifth Avenue bus, the B-1 ( 69th Street bus ) and the B-9 during the afternoon, running normally. 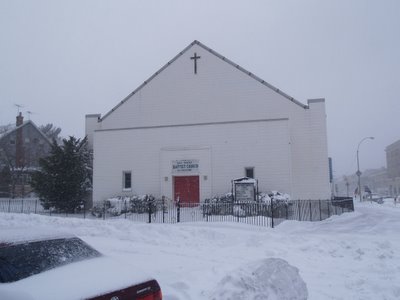 Bay Ridge Baptist Church. I've never been inside, but for some reason, I've always liked this simple church building on Fourth Avenue, over by Leif Erikson park. 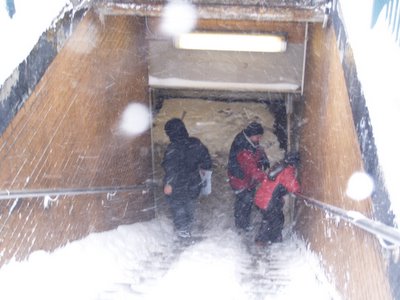 By 3pm, noone had bothered to clear any snow from the entrance to the Bay Ridge Avenue subway station. So people had to navigate the steps very carefully. The steps were dangerous with hard-packed snow. The people to your right had to walk sideways, they were afraid of slipping.
Posted by The Phantom at 3:27 PM 6 comments:

There's a major snowstorm that is expected to sock the NYC area Saturday night. I'll be sure to post some pictures of a white Bay Ridge.
Posted by The Phantom at 5:40 PM No comments:

Got a letter at bayrdidgephantom@gmail.com the other day from a Bay Ridge resident now retired in Florida. I found it interesting and repeat it here with permission.

Enjoyed your Coney Island article. I grew up in Bay Ridge and am now retired in Florida. Do you remember Scoville's bar? Back in the early fifties that was the place to be for Bay Ridgeites. It had locker rooms down in back of bar and a few of us used to rent one and you can guess what went on. Now, ask the old timers that went to Coney Island in the late 40's if they remember TIRZA.

I went to FHHS with Louie Lento and spent a lot of time in Lento's.. In '46 and '47 I ushered at the Dyker. Did much of my drinking in Sheridan's on 5th between 74th and 75th. As a matter of fact when I got drafted in '50 a bunch of us who got their "greetings", as well, met there and took the subway to the downtown NY induction center.

Here in Palm Coast, Florida there are six or seven guys and gals that went to FHHS. We get together once in a while. Keep up the good work Phantom. I'll keep in touch with some of my fond memories of playing roller hockey and football back in the late 40's
'til then
Artie

--I told Artie that I did not know the places mentioned ( other than the Dyker and Fort Hamilton HS ) and asked if I could reprint the above. This was the response.--

Sure, go ahead and post it. Maybe I'll hear from someone who remembers me or Scovilles or even TIRZA (she used to strip behind a curtain).

Do you remember a kid by the name of Julio Lugo? He used to live on 56th street. Played baseball at FHHS. Now he's the shorstop for the Tampa Bay Devil Rays. I met him several years ago when he was playing A ball for the Houston Astro's in Kissimmee, FL. I keep in touch now and then. He batted close to 300 last year. Rumor has it he may be traded to Yankees. We'll see!
'til then,
Artie

--No, I do not know Julio Logo at all, but will certainly be looking out for him now. It would be great to have a Bay Ridge guy playing for the Yankees, but Julio might run into a little Jeter problem if he wants to play shortstop in the Bronx!--
Posted by The Phantom at 11:03 PM No comments: