Thanks to the 40 people who logged on today. Spread the word.

The Bay Ridge Paper is given away for free around here, and it's not half bad. Its published by Brooklyn Paper Publications, the same people who produce the Brooklyn Paper, a similar paper serving Park Slope and Downtown Brooklyn. Both papers include a fair amount of content, including a report on the soon-to-be Brooklyn Nets.

Each edition is posted online as a PDF, if you're out of town, like the gent from Florida who e-mailed earlier today, just hit the above link, then hit Brooklyn Papers, and you'll see the Bay Ridge Paper as a PDF file.

Items from the past two Bay Ridge Paper editions:

Owl's Head Pollution Plant to receive a $20 million " plug " to eliminate funky odors that periodically emerge from open-air tanks
Some downtown block associations going to court to fight demolitions for the Nets Stadium
Nets Owner Bruce Ratner plans to build a temporary 4000 seat stadium in Coney Island to accomodate professional volleyball. The Pro Beach Volleyball Tour will be at Coney Island from August 17-20
Allstate Insurance will write no more new homeowners policies in Brooklyn. This is an effort by them to limit their " exposure " should a major hurricane hit Brooklyn. Since 1821, five hurricanes have hit New York. The map on the paper shows that the worst hit areas would likely Coney Island heading east to Jamaica Bay... but the potentially affected zones would reach deep into the borough. Bay Ridge would be hit much less severely. Most of the neighborhood is uphill from Shore Road.

Keep an eye on the Bay Ridge Paper for future updates.

Back to Coney Island

When I was a kid, Coney Island was the promised land. As a young Phantom, I used to love being taken on the Sea Beach Express subway to Coney Island.

I was way too young to have seen Coney Island in its heyday. Coney Island probably peaked in the 1940s, and I didn't see it for the first time until the 1960s. It was still a rollicking place, jam packed with people on a sizzling hot day.

There were three roller coasters then. I rode them all , the Tornado, the Thunderbolt, and the king of them all, the Cyclone.

I remember the first time I rode the ancient wooden Cyclone, which opened in 1927. The slow rise, followed by a nearly vertical descent, was terrifying, a rush. When the ride ended, I could not wait to jump back on. The Tornado and the Thunderbolt are gone, but the Cyclone endures. As does Nathan's famous, home of the best hot dogs in the universe.

A block or two from the Thunderbolt on one of the side throughfares leading to the boardwalk, was the Laughing Lady. She was a life-size mannaquin, in a glass cage, who laughed hysterically all day and all night long. You could hear her for blocks. I'll remember that voice forever!

Coney Island is only a shell of what it was. Most of the old rides are gone. But Nathan's endures, as does the Cyclone. The massive outdoor subway station has been completly rebuilt. Much new development is on the agenda.

But if you want to get a wee glimpse of Coney Island in its heyday, take a look at this short home video of the Wonder Wheel and
this clip of cars passing by on Surf Avenue with a streetcar visible.

These were the days when the only way to escape the heat on a blistering August night was to go to the movies, or to hop on the subway to the neon palace of Coney Island. The workingman's Riviera, cooled naturally by the magnificent salt breezes of the Atlantic Ocean.
Posted by The Phantom at 9:07 PM 3 comments:

Its been dark in there recently, so with the bad news about Lento's fresh in my mind, I hesitated to see what the notice on the window would say.

Its good news. The restaurant at TJ Bentleys is closed until the spring for major renovations. The bar is open Monday through Saturday until then.

TJ Bentleys is known for a superb Sunday brunch, which I trust will return in the spring.
Posted by The Phantom at 9:00 PM No comments:

From Blog NYC, an article by James Poling, who once worked as a bartender at Lentos. Lots of informed comment on the family--this guy knows what he is talking about. He also posts three good photos of the restaurant when it was alive.

" While East Villagers coped with the loss of the Second Avenue Deli over a rent dispute, Bay Ridge residents were reeling at the news that Lento's, a former speakeasy beloved for its thin-crust pizza, a clubby ambience and barroom walls lined with pictures of old ballplayers, had closed amid squabbling between family members who owned the business and their relatives who own the building. "

From today's Sunday NY Times, an article on the Lento's closing 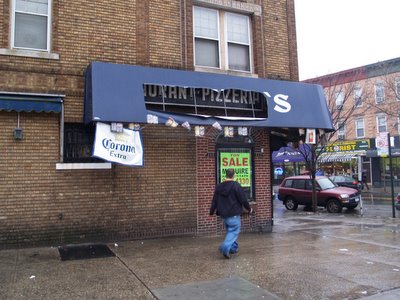 You can see the Lento's name cut out of the awning, underneath which is the old neon sign that shined on Third Avenue for many a decade. ( Click on photos to enlarge them ) 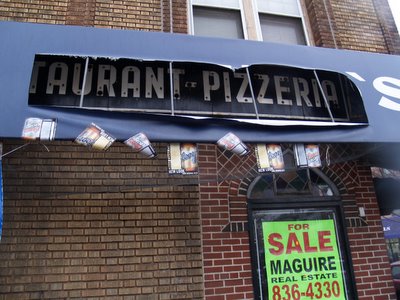 A closer view. Save this photo, duplicate it and send it to your friends.

Its a foggy night in Bay Ridge. The fog isn't expected to clear until early morning. And that's wonderful.

When the fog is heavy, ships in nearby New York Harbor sound their foghorns. I loved the haunting sound of a foghorn when I was a child, and I love it now.

On both sides of the Narrows, in the Harbor and in the Atlantic, the foghorns will sound as ships east and west, to sea and back to port. There is no finer sound than a ship's foghorn on a foggy night.
Posted by The Phantom at 10:15 PM No comments:

Lento's : Open Letter from the Phantom

Re:
Closing of Lento's Restaurant

The closing this week of Lento's restaurant is a major blow to Bay Ridge, to Brooklyn, and to all of New York City.

This restaurant has been a local institution for over seventy years, serving Bay Ridge and environs with good, simple food, served at reasonable prices.

Lento's served the community through the Depression, WW2, the end of the trolley cars, the Korean War, the Sixties, the building of the Verrazano Bridge and the Bay Ridge Towers, through the present.

It is understood that the non-renewal of Lento's lease has something to do with a family disagreement. We won't speak to that, as we don't know the people concerned.

We think that there can and should be an amicable solution that allows Lento's to stay right where it is for another 72 years. The building owner or a new building owner will need a tenant for the store space, and I hardly see how you could find a better tenant than the much beloved Lento's.

Maybe it's too late, but the Phantom says it ain't over.

We invite Bay Ridge's elected representatives to speak with the building owner and to the owners of Lento's Restaurant in order to use their good offices to work something out. There's a win-win solution out there if people will bargain in good faith. Please make it happen.

Posted by The Phantom at 6:34 PM No comments:

( updated twice )
I haven't confirmed it officially but it is almost certain that Lento's Restaurant has closed.

I called their number repeatedly Monday, with no answers.

Walked down there Monday night, and for the second night in a row, it was shuttered. And in the window, a " For Rent " sign.

I can't possibly understand this. They were locally famous for their thin-crust pizza. Zagats spoke well of it. This restaurant, at the corner of Ovington and Third Avenues since 1933, still did good business as far as I can tell.

I stopped at the Village Fruit Market across the corner, and the man behind the counter tells me that Lento's closed on Saturday.

I'm not at all happy. I will try to go down to take a picture tomorrow or Wednesday. If I learn anything more, I will post it. If anyone else has information, please add a comment or e-mail me at bayridgephantom@gmail.com

There are loads of places in the neighborhood where we can still go for great pizza. But Lento's was a good, simple, place with with 72 years of history. With it closed, something has been lost.

See two articles in Slice NY
Posted by The Phantom at 5:00 PM 2 comments:

Went past Lento's tonight, and it was closed at 730 pm. And the word Lento's was cut out of the awning. I hope that they have not closed. That would be awful.
Posted by The Phantom at 8:43 PM 2 comments: 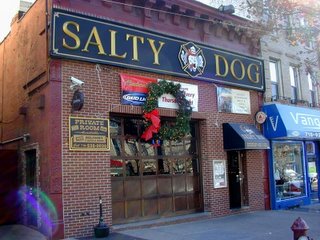 Dan Freeman, the first Superhero from Brooklyn, recently completed an odyssey of 1000 bar visits in one year.

Dan listed his experience in his blog
Thousand Bars, and stopped in Bay Ridge many times. His visit to Kelly's Tavern is recounted in the December 27 post.

If this odyssey had taken place years ago, I'll bet a dollar he would have stopped in Peggy O'Neill's. But Peggy's lost it's status a good Irish pub years ago, when the management changed and they messed it up.
Posted by The Phantom at 10:50 PM 6 comments: