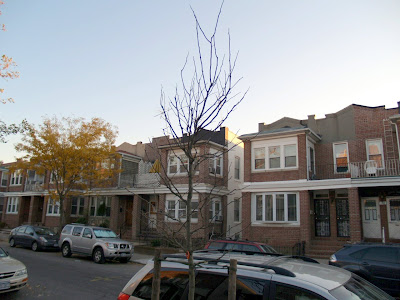 StreetFilms joined up with Transportation Alternatives’ Executive Director, Paul Steely White as he discussed congestion pricing with Express Bus commuters in Bay Ridge where riders could use a faster commute and less-crowded buses. White outlined how congestion pricing would decrease traffic in Bay Ridge and offer better transit as he listened to the commuters’ concerns.

A poll released by Quinnpiac today reports that a resounding 89 percent of respondents believed traffic congestion was a “very serious” or “somewhat serious” problem. However, New Yorkers are divided on how to accomplish reductions.

( Thank you very much, Elizabeth, Streetfilms )
Posted by The Phantom at 9:31 PM No comments:

Most of the houses that were knocked out by the tornado are still uninhabited, but a lot of work is being done. Here, see 337 Bay Ridge Avenue.

I spoke with Edgar, from one of the still-damaged houses down 68th Street. He hopes to be back home by Thanksgiving Day.

Two English women "run" past. Three to one says that they never finished the race.

Every year, the New York Marathon passes within a half-block of my house. Most of the runners have lots of energy when it passes 68th Street, along Fourth Avenue. Here, Tommy from down the block watches the runners parade by.

The Meaning of American Pie

Mark Simone interviewed Don McLean on WABC redio today. McLean mentioned this youtube video, which he himself has not seen, but which he has heard about.

It attempts to explain the meaning of the song, and I imagine that he has a lot of it right. In any event, the video is filled with interesting facts. Wow--listen for the one about Waylon Jennings
Posted by The Phantom at 8:55 PM 3 comments: