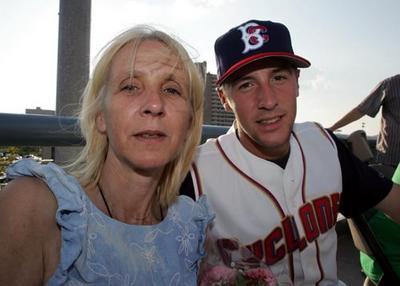 Jon Malo is a 21 year old kid from suburban Montreal who is living his dream playing shortstop for the Brooklyn Cyclones.

But he bears a heavy burden because his Mom is dying of colon cancer and related illnesses. This story broke in a Jon Heyman column in Newsday.

The doctors in Canada completely missed the diagnosis four years ago. Now, an operation that could save her life is not available in Quebec. It is available in the US--but would cost $250,000--money Linda Ferland and her minor leauger son do not have.

That's where you might come in. Jon Malo is raising money, the Cyclones are helping, and so can we. There's a fundraising website up in Quebec, and this is it, translated from the French

This is the place where you can make a donation. Spread the word.
Posted by The Phantom at 3:45 PM No comments: 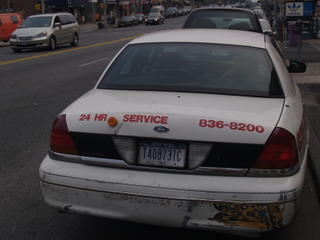 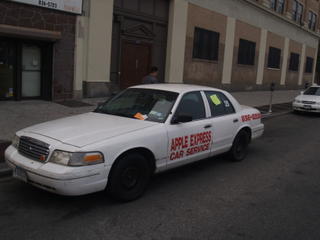 Business must be bad at Apple Express car service. They've been parking their cars overnight on Senator Street and 68th Street over the past weeks. Its illegal for a livery car company to park on the streets overnight, but Apple Express does it anyway. Bad thing is that Apple Express takes parking spots away from a neighborhood with too few of them.

Maybe we will post license plates of these illegally parked cars as a public service. Apple Express, start respecting the neighborhood.
Posted by The Phantom at 11:30 PM 3 comments:

Word has it that Mrs. Zafiroulos has shown some progress. Still in critical condition, but there's some reason to be hopeful.Hang in there.

And Marty, you hang in there too.
Posted by The Phantom at 11:40 PM No comments:

State Senator Golden was involved in an auto accidentyesterday on Third Avenue and 84th Street. The victim, Harkli Zafiroulos, 74 is in Lutheran Hospital in critical condition. The article in the NY Post says that she was crossing against the light.

Hope she makes it. Say a prayer, and spare one for Mr. Golden, too.

He's a good man. Have met him several times over the years and have great respect for him.
Posted by The Phantom at 11:35 AM No comments: 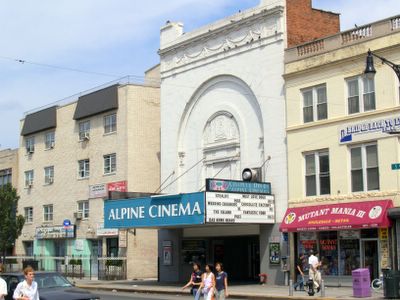 Of the eight theaters that once operated in Bay Ridge ( including the Fortway, Stanley, Dyker, Shore Road, Harbor, Electra and the Bay Ridge Theater ) the last man standing is the sturdy Alpine Theater.

The Loew's Alpine opened in 1921, and remained a Loew's theater until pretty recently. Originally a 2200 seat palace, it, like most theaters, has been chopped up into a much less appealing multiplex.

What I think was the original marquee was damaged when some jamoke ran a truck into it a few years ago. The new bland marquee will have to do.

To the left of the Alpine is the Bay Ridge Mosque ; to the right, for years, was the Neisen Furniture Store.

More details, as always, on the wonderful Cinema Treasures.

NYPD was randomly checking bags at Bay Ridge Avenue R train this morning. Good.
Posted by The Phantom at 6:17 PM No comments: 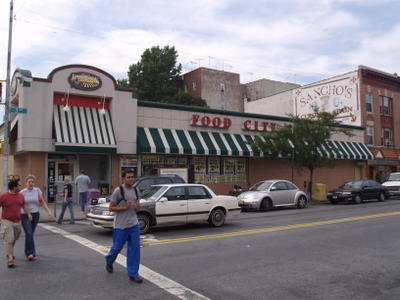 You've never been to a movie at the Electra, and neither have I. The Electra was built on this site at 75th and Third Avenue in 1913 as a silent movie house, was converted to a sound house, and lasted until the early 1950s.

Then they tore it down, and built a ( Bohack? ) supermarket in 1960. Its now a Food City supermarket. Good Spanish food next door at Sanchos.

More information on the Electra at Cinema Treasures

Tomorrow, we conclude our tour of Bay Ridge Theaters with the last man standing: the Alpine.
Posted by The Phantom at 11:06 PM No comments: 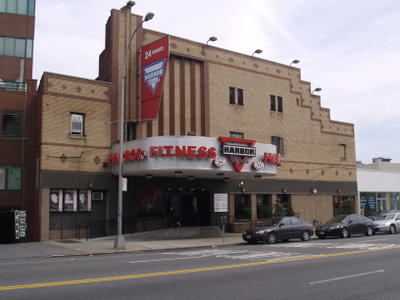 Out on Fourth Avenue and 92nd St, the site of the Harbor Theater still has its marquee. Though the theater closed in 1979, the building still looks like a movie theater, and is in fine shape. Now a health club, its one that has " Harbor " in its name. Whoever decided to keep the marquee and the word " Harbor " , I tip my hat to you. Details on Cinema Treasures
Posted by The Phantom at 10:48 PM No comments: 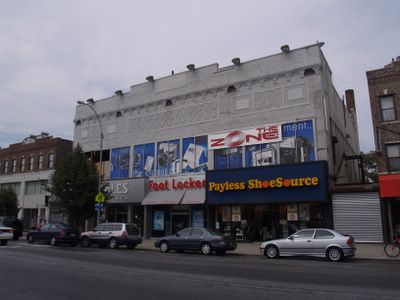 Down 86th Street, across the street from Century 21 Department Store, we see the building most residents will remember as the home of Crazy Eddie, then later the Wiz. Its now been chopped up into three stores, and the there is construction going on upstairs ( the left wall is punched out in places ).

You'd have to be a very long time resident of Bay Ridge to remember that there was once a movie theater here, the RKO Shore Road. When TV became widespread in the 1950s, this place was closed. More info to be found at Cinema Treasures.

Tomorrow, we walk down to Fourth Avenue, hang a left, and walk down to the Harbor Theater.
Posted by The Phantom at 10:40 PM No comments: 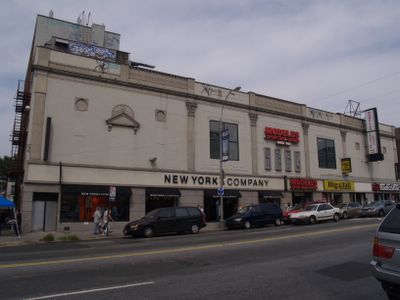 The RKO Dyker was on 86th Street between Fifth and Sixth Avenues. Details to be found at Cinema Treasures. But lots of us remember the Dyker, which closed its doors in April 1977. Tomorrow, we walk one block down 86th Street to the Shore Road Theater, which few would be old enough to remember...
Posted by The Phantom at 7:46 PM No comments: