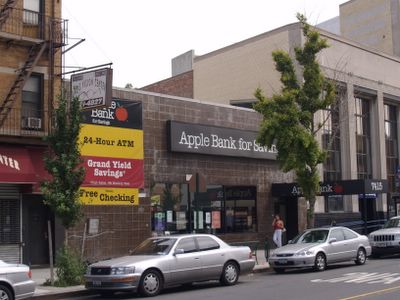 The Stanley Theater once stood here ( what is now Apple Bank )

Posted by The Phantom at 9:09 PM No comments:

This week, we will take a look at tour of the sites of what once were movie theaters in Bay Ridge. In earlier posts, we've spoken of the Bay Ridge Theater, then of the recently closed Fortway Theater.

Today, we start at Fifth Avenue, between 74th and 75th Street. You'd never know that this Apple Bank was a movie theater, but it was the Stanley Theater for years. Click into Cinema Treasures for lots of information on this theater.

I may have seen the closed marquee of this theater, which would have to be in the 1960s ( Cinema Treaures believes it closed in 1957 ); I definitely did see it as a supermarket in the late 1960s and later on remember a Chase Manhattan Bank at this site.

This is next to local landmark " The Lincoln Savings Bank ", which has changed hands a zillion times and is now Washington Mutual or whatever.

Tomorrow, we walk down Fifth Avenue in the direction of the Dyker.
Posted by The Phantom at 8:44 PM 1 comment:

Posted by The Phantom at 9:58 PM No comments: 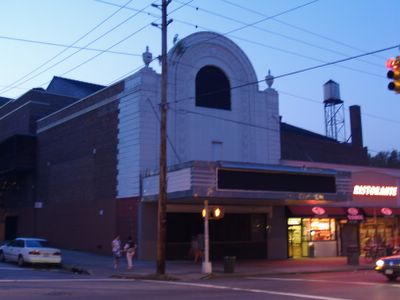 The lights are out for good. If you look closely, you'll see a small tree growing on the left side of the arch near the top.

Will try to take a photo of the Fortway soon. Its funny, Bay Ridge is a pretty large neighborhood, but we have no press worth a damn--do not see a thing in the internet even on this. For what its worth, here are some snippets from " Cinema Treasures " about the Fortway here.

I've been ignoring this blog for awhile, sorry about that. A major reason for this is that I was in Hawaii the week before last, and I was preparing for the trip, then recovering from the trip etc etc.

Unfortunately, I've heard that the Fortway Theater has closed. The Fortway joins the Bay Ridge Theater, the Dyker, the Harbor, the Stanley and the Berkshire as Bay Ridge theaters that no longer exist.

And with the rise of DVDs, a lot more neighborhood theaters will be closing, everywhere.

And a very local restaurant, Banana Leaf was reviewed in the New York Times. I was reading the NYT in Hawaii when I read this favorable review. I hope this restaurant makes it.
Posted by The Phantom at 10:09 PM 1 comment:

The NY Times had a story today about how fireworks in NY " don't disappear "...how they are creeping back in NY after the Guiliani ban. Again, I heard plenty of firecrackers in Bay Ridge yesterday. Not like the Bay Ridge and Bensonhurst of the 1960s, which was a once a year fireworks free-fire zone, but certainly fireworks were heard all day long.

In the early 1970s I remember spending every penny I had on firecrackers, " ashcans ", cherry bombs, " jap rockets " ( bottle rockets ) and all the rest of it. Me and my pyro buddies would blow the neighborhood to hell every year, and it was great fun.

Rudy the Reformer made the city a safer place by banning them effectively, but it did take away a lot of the fun of July 4 for little kids. Big kids too.
Posted by The Phantom at 5:43 PM No comments:

You can tell Rudy isn't mayor anymore. As I tortured myself doing some exterior painting today, heard lots of fireworks. Not cherry bombs or other big stuff, these were firecrackers. But you did not hear them when Rudy was mayor, not in his second term anyway.
Posted by The Phantom at 10:50 PM No comments: