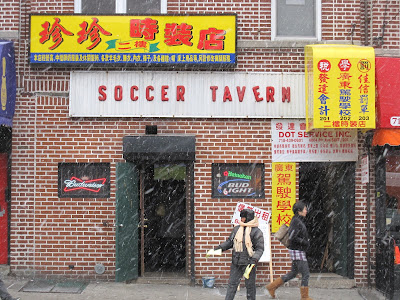 After work on Friday, I met up with the Kong and James in the Soccer Tavern, at 6004 Eighth Avenue.

This bar opened about thirty years ago, at at time when Eighth Avenue was still kinda sorta a Scandinavian neighborhood. Three decades later, this is a Chinese neighborhood, but there's still some remnants of the old Norwegian, Swede and Irish influence.

I arrived first, since the plan was for James to give the Kong a ride and for me to arrive straight from work. I arrived from work right on time, but James was lost somewhere near Father Capodano Boulevard in the wilds of Staten Island.

When I got there, the crowd was mostly Chinese men. A bunch of customers " right off the boat " hung out in the back benches, while I grabbed a seat by the bar and tried to save two seats for Kong and Jimmy, if Jimmy was ever gonna show up.

Its a comfortable, neighborhood place. The barmaid used to work in Bay Ridge's long lost Glenroe, and was well accustomed to the magnificent tradition of the buyback. Mugs were kept in the freezer.

The day bartender was sitting at the far end, and, wobbly legged, had to be helped from his chair when it was time for him to head home. You have to like a place where the employees like what they sell.

The Chinese guys left after a while, and a mixed Chinese, Scandinavian and Irish crowd carried on after that. Someone played " Fairytale of New York ".

This was my first visit to this bar, but it won't by my last. It's near a large number of good Chinese restaurants, and is in walkable distance of home, so why not?

Our sources say that the new Key Food supermarket on Bay Ridge Ave. / 69th Street will open on Sunday January 10
Posted by The Phantom at 10:08 PM 4 comments:

Bob Dylan once called Liam Clancy "the best ballad singer I've ever heard." Clancy died Friday at a hospital in County Cork, Ireland. He was 74.
From NPR
Posted by The Phantom at 12:07 PM 1 comment:

John Batchelor Show Back on the Air Five Nights A Week 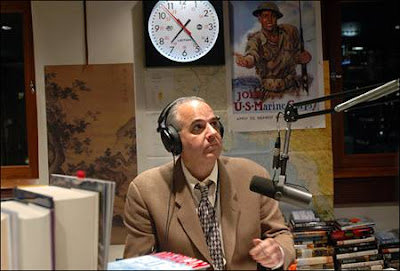 Effective this week, the John Batchelor Show is back on WABC 77 New York, from 9pm - 1am , Monday through Friday.

John Batchelor is the best public affairs talk host on the US radio airwaves. He's not a screamer, and he does not fit into any right or left wing cubbyhole. He's got serious international connections, and on every show you'll hear detail and frankness on domestic and international issues that you won't hear elsewhere.

Check it out, on radio or on the WABC stream. Highly recommended.
Posted by The Phantom at 6:30 PM No comments: