People sometimes forget how important his Christian faith was to him. The recognition of sin, forgiveness and redemption. They were always in his work.

Happy Birthday, John.
Posted by The Phantom at 10:28 AM 3 comments: 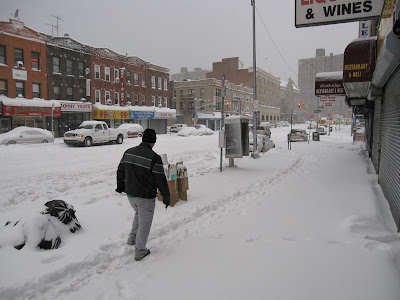 Lots of snow, but that's a good thing.

Plenty of folks had the day off, but if you needed to come in to the city, the buses and subways were right on time.

Let it snow. Take the kids down to Bliss Park! 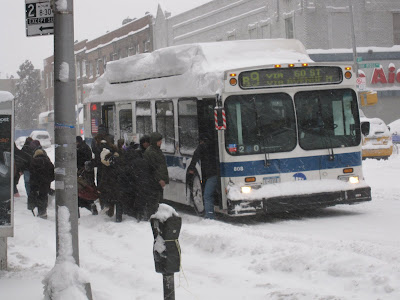 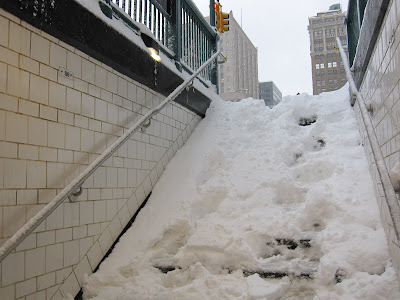 Snow coming in wave after wave. It's good to have a real winter after some subpar ones.

If you're fortunate enough to live in a place with four seasons, this is what you get in wintertime. Snow, and lots of it.

The NY subways and buses performed admirably today. Plenty of people came in to work. Above, the exit at the Cortlandt St subway station, right by the World Trade Center. Where the construction guys were working today. 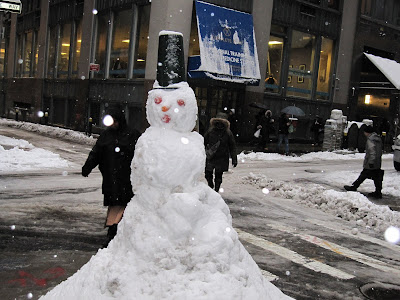 A snowman made by the workers in front of the Jubilee supermarket on John Street.
Posted by The Phantom at 9:21 AM No comments:

" Goodnight Irene " by the Weavers

The Weavers were a New York City based folk group who was pretty famous from the late forties to the mid sixties.

They were lefties who got caught in the McCarthy thing. But they sure could sing, and if this is what a bunch of Commies sounds like we could use more of them.

The first R train to Manhattan leaves 95th St at 521am tomorrow. I hope to be on it.

And then I'll be at the Knicks game Monday night. By pure luck, I will be there on the second annual Legends Night where Willis Reed and Walt Frazier will be honored at halftime.

And then its to Bermuda Tuesday and Wednesday for work. Meet me at the Hamilton Princess for a beer Tuesday night.

Back during the wintry mix on Wednesday. Cheers.

I called Key Food corporate HQ in Staten Island on Monday - they say that the 69th St store is projected to open in another six weeks. I give up - someone's not been giving us the whole story on this.
Posted by The Phantom at 9:49 PM No comments:

Everyone in New Orleans Hits the Lottery on the Same Night

I don't know how many of youze have been to New Orleans, but if you haven't what the hell's wrong with you?

In it's deeply flawed on so many levels way, it's one of the great cities of America or anywhere else. There's a gentleness and a relaxed air there that is unlike what you will find in any other US city. And an accent that will make you think you're in NY or Jersey. And lots of great food. Plus you can drink an open beer walking down the street. But I digress.

Hearing the old timers growing up, I heard of the night when the Brooklyn Dodgers won the World Series in 1955, beating the hated New York Yankees after decades of trying. People were overcome with joy. The little guy finally beat Goliath. The bars, which normally closed at 4am in the afternoon, stayed open till way after the sun rose the next day. Everyone was filled with joy, as though everyone hit the lottery at once.

I think this night is like that in New Orleans. They've been kicked in the head a few times, but they get back up. It's been proven that they know how to party. But the party they have tonight, is gonna be way better than the one they get at Mardi Gras, which comes soon. This may be better than ten Mardi Gras.

I wish I was in New Orleans tonight, for the mother of all parties.

Word is that there will be a football game this Sunday night. The New Orleans team will face the team that used to be the Baltimore Colts, before the drunken bum who owned the Baltimore Colts snuck the team out to Indianapolis in the middle of the night.

I'm not a big fan of the NFL. I can't be a big fan of a sport where there are so many long breaks for commercials ( the game is really terrible live. You really notice all the stoppages ) or where the gangsters who run the sport have turned a blind eye to the high rate of concussions / brain injuries / other injuries by its athlete for about 75 years. It's ugly beyond words.

But this Super Duper Bowl is important to some people, so I guess you have to say who you want to win. I'll go for the New Orleans Saints. Because of New Orleans. If the Saints win, you'll see the mother of all parties in New Orleans, Sunday night going into Monday morning.

Hope noone gets a concussion, and that noone is paralyzed for life like Darryl Stingley. Lets go NFL.

Louis Armstrong was born in New Orleans in 1901. He was the grandson of slaves, and was born into great poverty. His father abandoned the family, and then the mother left too.

He overcame this background to become one of the best musicians the world has ever seen.

They didn't say which year

Kenny advises that he saw them cleaning out the Sunnydale Farms store on Third and 68th the other day. Hopefully some reconstruction is on the way?
Posted by The Phantom at 3:16 PM 4 comments: 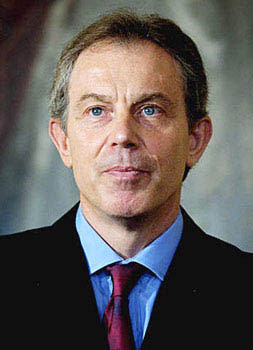 As our British friends are well aware, the UK has recently seen the Chilcot Commission hearings, meant to investigate " how the decision to invade Iraq was made, and consider the lessons learned."

The Iraq war has been long and terrible. The former PM has many enemies on the left and many on the right. They all wanted Blair to back down, to apologize, to be humbled in some way. Except Blair did not go along with the script

From an opinion piece in Monday's Wall St Journal: Mr. Blair offered a ringing defense of the decision to invade Iraq, and a very different set of lessons for the present. "This isn't about a lie, or a conspiracy, or a deceit, or a deception. It is a decision," Mr. Blair told a packed room that included relatives of soldiers killed in Iraq. "And the decision I had to take was, given [Saddam's] history, given his use of chemical weapons, given the over one million people whose deaths he had caused, given 10 years of breaking U.N. resolutions, could we take the risk of this man reconstituting his weapons program?"

The article goes on to say Every Western country, including those opposed to the war, believed Saddam had WMD, a fact forgotten by many now, but which was the essential basis on which any leader had to make decisions at the time.

Blair adds "What we now know is that he [Saddam] retained the intent and the intellectual know-how to restart a nuclear and a chemical weapons program when the inspectors were out and the sanctions changed, which they were going to do. . . . "Today we would be facing a situation where Iraq was competing with Iran, competing both on nuclear weapons capability and competing more importantly perhaps than anything else . . . in respect of support of terrorist groups. . . . If I am asked whether I believe we are safer, more secure, that Iraq is better, that our own security is better, with Saddam and his two sons out of office and out of power, I believe indeed we are.". And of course, Mr. Blair is correct.

It's been seven years since the Iraq war started, a war that began as a cakewalk, and which unfolded as a moral horror, one compared with Vietnam. Despite recent sectarian atrocities , things have steadily gotten better . A civil resolution is not unthinkable, not now.
But I'm not here to convince anyone that the war was correct - I think that not deposing Saddam would have led to a vastly greater horror ,but probably most here disagree and that is fine.

I only ask you to reconsider something that I've said on these pages many times. That the oft-repeated cliche that Blair was " Bush's poodle " was never accurate. It was always a wicked, untrue slander.

Tony Blair was a strong advocate of coming to terms with Saddam's Iraq before 9/11 and before Bush even took his oath of office. He was at least a co author of the move for regime change in Baghdad, and as national leaders went he may have been its father.

I don't care to speak of his performance on other matters - but on Iraq, Blair continues to exemplify a political courage and a clarity of thought rare in any time. A tip of the hat to Mr. Tony Blair, who continues to speak the truth on Iraq.

And may God bless the men and women who serve in Iraq and Afghanistan.
Posted by The Phantom at 12:40 AM 1 comment: