Hi guys. I just bought a little Canon SD880 IS point and shoot camera. I took this short film with it earlier today.

This is the southbound R train arriving at 25th Street. I love this camera.

Will the Circle Be Unbroken?

This song will always be associated with the Carter family. But the great Pentangle
surely put their own stamp on it here.
Posted by The Phantom at 10:59 AM 1 comment:

Just wanted to drop a line and see if you knew or had heard anything about the shooting on Shore Road [ Friday night ] . Took place on Shore, between 97th and 99th at around 10:30 last night. Haven't seen anything posted on your site, which i read frequently. You usually have this sort of thing posted. Please keep your fellow Bay Ridge residents informed if you hear anything.

This is the first I've heard. If anyone has details, please comment.

Brooklyn Row House provides evidence that it may be. Ouch. Lets see what happens.

This looks like original reporting, so good job BRH!

I just got ahold of Sammy Abed, who says that he expects the 69th Street Key Food to open in February 2009. Hope that's true!
Posted by The Phantom at 1:23 PM 3 comments:

Courtesy The Imagine Project,a program dedicated to nurturing a child's creativity through the performing arts.
Posted by The Phantom at 11:36 PM No comments:

Some warm music on a cold night.

I wasn't even aware of it, but some numbskull apparently wanted to put up volleyball courts in Lief Erickson Park between Third and Fourth Avenues.

Community Board 10 just voted it down the volleyball plan according to the Brooklyn Paper.

For decades this was a nice patch of green in a busy area. Then it went into severe decay, as the city basically stopped maintaining it. For years, it's been scarred by the thugs who run Bay Ridge High School ( excuse me "Telecommunications HS" is the current alibi ) , who took it upon themselves to put a shitty temporary classroom there, and who choose to leave it there even though it is no longer used.

Why can't it go back to being a well maintained green park, with benches? Why does every blade of grass have to be paved over? Apparently it will now be returned to parkland . Look for the work to begin 50 years from now.

The Brooklyn Paper also reports that the site of the Bay Ridge Methodist Church is likely to be turned into a K to 8 elementary school.

They better not give any landmark preservation classes to the 8th graders. Emerick will get pissed.

The Daily News reports that the sainted Richard Martin is losing his position as the crankiest superintendent in Brooklyn. Say it ain't so, Russian Lady.
Posted by The Phantom at 8:31 PM 4 comments:

Everything that I've seen from the old Johnny Cash Show is a gem. Here, he joins fellow Arkansan Glen Campbell.
Posted by The Phantom at 9:53 PM 1 comment:


Johnny Cash didn't make this video, and his record company didn't either. But someone who understands Cash a lot did.
Posted by The Phantom at 10:19 PM 3 comments:

About 35 years ago, in Shea Stadium, OJ Simpson of the Buffalo Bills had one of his best days ever. He went over 2000 rushing yards for the season- the first NFL player to do that. Earlier in the game, he surpassed the single season rushing record of the great Jim Brown.

Thirteen years ago, he was falsely acquitted of two vicious murders.

Today, some long overdue justice as he was sentenced to up to 33 years for robbery and kidnapping.

Karma's a bitch. The wheels of justice grind slow, but here they have ground fine. He may die in prison.

Thirty five years ago, he was cheered by the fans at Shea, and had the world at his feet.
Posted by The Phantom at 9:38 PM 7 comments: 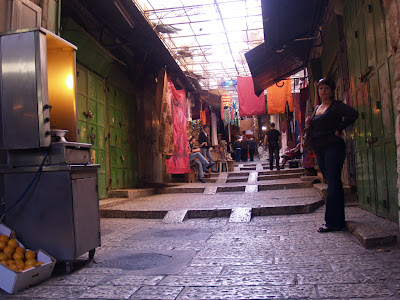 The trip to Israel was all too short, but I'm glad that I went. I had been to Haifa in 1979 aboard the USS Albany back in 1979, but that was a long time ago. I stayed in Tel Aviv and made day trips out of town on three days. The rest of the time I just hung out.

The first photo was in the middle of the Old City, which is filled with tiny stores and stalls. 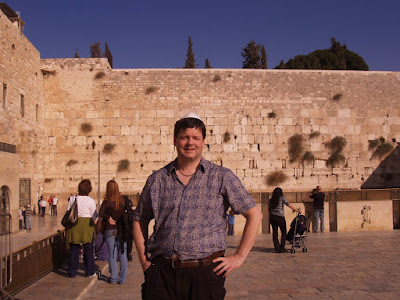 This is a sweaty me at the Wailing Wall- one of only two things in Jerusalem that I wanted to see. 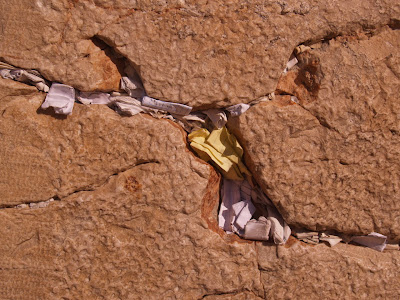 Some of the elders are having a very tough time. I left wishes for their recovery in cracks in the Wailing Wall.
Posted by The Phantom at 10:50 PM 8 comments: