Music that, once heard, stays in your head forever. A tip of the hat to the old fellas, and to Ry Cooder for bringing them back and to the broader world.

For extra credit, listen and see this

Off to San Diego Saturday. Will be in touch from the road.
Posted by The Phantom at 11:30 PM 2 comments: 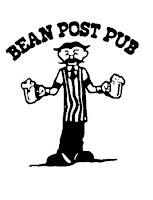 Billy DiCristina was having a few pops a few nights back at Bay Ridge's Bean Post Pub over on 76th and Fifth, where a patron told him about the treasonous attempt by
Gino ("the rat") Castignole to jinx the new Yankee Stadium by planting a Red Sox shirt in its concrete flooring.

Billy did what any red-blooded New Yorker would do. "Get me the Post " he said to the bartender. "We have to get that Boston garbage out of our Stadium"!

The rest is history. The Post broke the story to the world. The Yankees dug up the toxic waste. The curse is cursed. And Billy is the uncrowned King of Bay Ridge.

The Bean Post Pub is hereby declared the official Yankee bar of Bay Ridge. And Billy's money is no good there any more!

Yesterday was one of the glorious spring days. Went down to Helen and Frank's house down in Wayne, PA where Bobby, Keri, Steve and I threw the baseball around.

I remember the days when baseball was the only sport. To me, its still that way. The other sports are filler for the grim winter days when you await Spring Training.

Many beautiful things come in the spring,. Baseball, and it's memories of my lifetime, and of everyone's lifetime, is one of them. 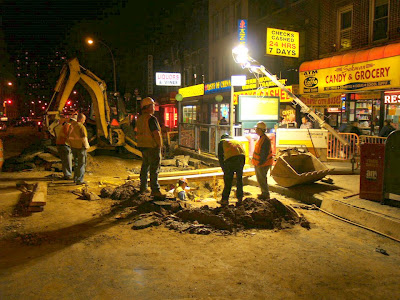 For the past three weeks, there's been a leak in a water pipe under Fourth Avenue by 69th St. The Bay Ridge Avenue subway station has been a bit of a lagoon during that time. Commuters have had to dodge the "raindrops" when entering the station.

Tonight, a construction crew was hard at work fixing the pipe.(click on photo to enlarge)

The people of London and Paris were fantastic. Now, lets see what happens in San Francisco. Expect great things.
Posted by The Phantom at 2:29 PM 30 comments:

This song has been in the news recently, for all the wrong reasons.

It's one of my top songs of all time. Never sure what the lyrics were supposed to mean, but oh my God the organ music is the best. Hear it one time, and you remember it for the rest of your life. By Procul Harum, 1967.

This song will live forever. Here is a live performance by Belgian singer Helmut Lotti, in Brussels Square, in 2003.

Now, a pint of Brooklyn Lager to anyone who can tell me what these lyrics mean:
We skipped the light fandango
turned cartwheels 'cross the floor
I was feeling kinda seasick
but the crowd called out for more
The room was humming harder
as the ceiling flew away
When we called out for another drink
the waiter brought a tray

And so it was that later
as the miller told his tale
that her face, at first just ghostly,
turned a whiter shade of pale

She said, 'There is no reason
and the truth is plain to see.'
But I wandered through my playing cards
and would not let her be
one of sixteen vestal virgins
who were leaving for the coast
and although my eyes were open
they might have just as well've been closed

She said, 'I'm home on shore leave,'
though in truth we were at sea
so I took her by the looking glass
and forced her to agree
saying, 'You must be the mermaid
who took Neptune for a ride.'
But she smiled at me so sadly
that my anger straightway died

If music be the food of love [see note, left, about this verse + its opening]
then laughter is its queen
and likewise if behind is in front
then dirt in truth is clean
My mouth by then like cardboard
seemed to slip straight through my head
So we crash-dived straightway quickly
and attacked the ocean bed
Posted by The Phantom at 1:03 PM 8 comments:

Trump Bay Ridge On the Way 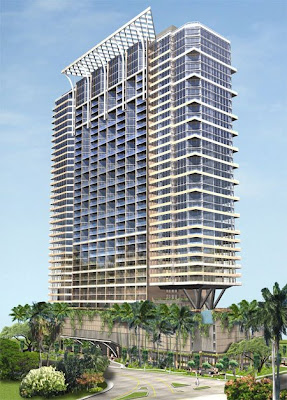 If the reports we hear are true, the two Bay Ridge Towers are about to have a pricy neighbor.

Our sources tell us that the Trump Organization is quietly acquiring land parcels south of the Bay Ridge Towers for the construction of Trump Bay Ridge.

The 50 story condominium will contain a mere 100 massive units, with prices ranging from $2,500,000 to $17,500,000 depending on whether the buyer prefers the "Gowanus View", the "Harbor View" or the "Commodore Barry View" that offers commanding vistas of the Verrazzano Bridge and the harbor.

All units will be fitted with Energy Star compliant appliances and triple glazed windows, so residents of Trump Bay Ridge will be striking a mighty blow against global warming.

Final construction details are being hammered out with City Councilman Gentile, who is trying to obtain a discount for existing Bay Ridge residents.

Interested buyers should watch for an official announcement in the Home Reporter and Sunset News shortly.
Posted by The Phantom at 9:30 PM 15 comments: