The Kid From Brooklyn on Starbucks


The Kid from Brooklyn isn't from Bay Ridge. But he should be!!
Posted by The Phantom at 9:05 PM No comments:

Flying over the Verrazano Bridge in a small plane

New York City VFR Flight From Southern Manhattan to the Verrazano Bridge. The bridge has a nice cloud layer over the deck. I don't fear heights much, but this is scary to me!

See today's View from 103 for a helicopter's view of the World Trade Center.
Posted by The Phantom at 9:45 PM No comments:

THE 2ND ANNUAL BROOKLYN PIZZA EATING CONTEST
Support the Children of Mercyfirst June 4th at
"THE 2ND ANNUAL BROOKLYN PIZZA EATING CONTEST"
Sponsored by Rocco's Pizzeria on 5th and Super Roofer
When: 5th Avenue Board of trade festival, Sunday, June 4th, 2006
(contest will start promptly at 3PM)
Where: Rocco's Pizzeria, 7818 5th Ave. (78th and 79th street)
Why: All proceeds donate to mercyFirst, a child welfare agency that is the union of Angel Guardian and St. Mary's Children and Family services, serving over 3,000 children at 27 locations throughout the NY area.
Prizes: Raffle includes Florida Vacation, DVD Player, Gift Certificates and more.
Live entertainment, media and more!
Contact us to be apart of our event.
Rocco's Pizzeria
Danny - 718-238-7655
Posted by The Phantom at 9:48 PM 5 comments:

Bay Ridge Place, between 69th Street and Ovington Avenue, about 1045 am.

I opened my plastic bag of advertising circulars today, and what do I see for the first time ever, but a circular for Fairway Market. They've opened a big new store in Red Hook.

Bay Ridge is so desperately underserved for supermarkets --wonder why you can't drive two blocks without running into a Fresh Direct truck?--that there will surely be lots of people from Bay Ridge making the drive from Bay Ridge to Red Hook.

Bay Ridge basically only has two big supermarkets- Key Food and Foodtown on Third Avenue. Though they do the best they can, they're not that big, and are overcrowded on the weekend.

So, if you have a car, you may want to consider a trip to Fairway in Red Hook. Fairway is a great operation- the Broadway store in Manhattan has an immense selection of great food at fair prices. And Red Hook is not that far. And it is NOT the " bad neighborhood " that it once was.

Maybe Bay Ridge will get a huge quality supermarket someday. Don't hold your breath.
Posted by The Phantom at 12:15 AM 5 comments:

This laundromat looks like it has stood at the north side of 86th Street, above Sixth Avenue, for quite a while. Gotta love those curtains.

Posted by The Phantom at 7:42 PM No comments:

There's a whole universe of photos to be found on flickr.com and Bay Ridge gets its fair share.

See above shot of the world-famous Bay Ridge Avenue R subway entrance. From below, looking up. Get nice separation of the globes, what looks to be the last bit of light before night sets in, from above and through the rails to the left.

If you're like me, you'l often enough turn to the right upon exiting here, in order to get two slices and a Coke from Original's Pizza on the corner of Fourth Avenue and Bay Ridge Avenue ( 69th St )

Isn't this a station in downtown Brooklyn?

Posted by The Phantom at 7:26 PM No comments:

To explain why its late!!

Bay Ridge Dog and Cat Hospital, Fifth Avenue, off 68th Street. Has been taking care of the neighborhood's animals for a very long time.

John Custom Tailor is on Fifth Avenue, just off Ovington Avenue in Bay Ridge Brooklyn. Its been there for a long time.

Posted by The Phantom at 8:56 PM No comments: 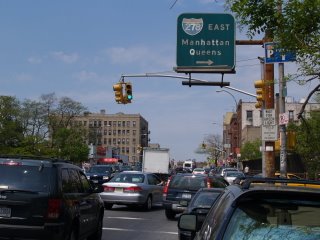 Turning onto Manhattan bound 278, off 86th Street, 7th Avenue. The direction sign probably dates to when the Verrazano Bridge opened in 1964. 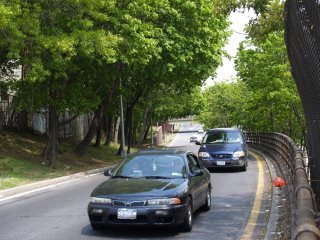 Cars exiting at 86th Street and Seventh Avenue from 278, in the direction coming from Manhattan and downtown Brooklyn. The driver in the lead car has noticed me taking the photo. The woman passenger continues to read a book. ( double click photos to see greater detail )
Posted by The Phantom at 10:20 PM 7 comments:

This next to the Staten Island Expressway? You gotta be kidding me!!

There's been a fair amount of talk recently about building an immense NASCAR track near the Goethals Bridge on Staten Island. This is beyond stupid for two principal reasons.

The first is the thought that anyone would spend one minute of their live watching or one dollar of their money paying to see a bunch of cars race around a noisy track.

The second is that the Goethals Bridge and the Staten Island Expressway that it feeds into are the most congested strips of road in all of New York City. The Goethals has two skinny lanes when it should have three full size lanes. The Staten Island Expressway carries far more traffic than it was designed for. Its a good day when the traffic moves slow. Most times and most days it is stop and go or just stop.

Now why would any horse's ass think it a good idea to build an immense car-racing stadium adjacent to the most congested roads in all of New York City? You got me.

The proponents of this bad idea have worked out a plan whereby each spectator would be forced to take mass transit of some kind. That would be the best way to make the race-day situation less bad, but it would still add many more vehicles --buses-- to the roads that cannot handle the volume of traffic that I have now.

Former Staten Island Borough President Guy Molinari has been on the payroll of the NASCAR proponents, but this idea is very unpopular on Staten Island. And now all three of Staten Island's City Council members have come out against the idea. Good move, guys.
Posted by The Phantom at 10:08 PM 13 comments:

If you live in Bay Ridge and have a car you have to be nuts. First, finding a parking spot on the street is half-impossible. Second, if you're traveling across to Staten Island or New Jersey, you typically go over the Verrazzano Bridge and pay an obscene $9 westbound toll to do so. ( Heretake a look at current traffic there.)

And you're surrounded by three of the worst highways in America:
It would be a huge improvement to West Brooklyn if the Gowanus Expressway could be replaced. And there has been serious talk of that-- of replacing it with a tunnel. The media has reported that NY State has approved a route for a tunnel--it looks as though the Belt Parkway between 65th Street and the Gowanus itself --along First Avenue-- would be placed underground. This presumably would allow for a much nicer park in Bay Ridge along the Shore. And the First Avenue route for the Gowanus would allow the current elevated monstrosity to stay up until the tunnel was completed.

The problem with a tunnel alternative is that it is much more expensive than an elevated Lots of Federal money would be needed. Does NYC's Congressional delegation have the muscle to get these funds? Will the sun ever shine on Third Avenue in Sunset Park again?

If anyone has a link to additional information on this project, please shoot me a note at
bayridgephantom@gmail.com

PS- Is the Cross-Harbor Tunnel idea still alive? If it is, it would make a lot of sense to built it at the same time as the Gowanus Tunnel. Local politicians, lets swing for the fences. Lets get these important projects built.
Posted by The Phantom at 9:58 PM 4 comments:

As the Manhattan bound R train slows to a halt at Bay Ridge Avenue, a couple seen through the door is about to get on the train.

The Alpine's been saved, which is a great thing. The Bay Ridge Paper reports that City Councilman Vincent Gentile held a press conference this past Tuesday to take credit for the good news. It was attended by Borough President Markowitz, Community Board 10 District Manager Josephine Beckmann, congressional candidate Steve Harrison, Fifth Avenue Board of Trade board member Jim Clark, and Tim King, the Massey-Knakal real estate broker who sold the building.

Three hours later, State Senator Marty Golden held a press conference. He claimed to have been the driving force behind the saving of the Alpine. He said that he was the one who expanded the boundaries of an " Empire Zone " to include the Alpine Theater.

The Phantom likes both Gentile and Golden, and has met them both several times. They're both doing a good job for the neighborhood. But to minimize any ill will between our elected representatives, I will take credit for this most welcome development!

Meanwhile, the Bay Ridge Paper article quotes an Alpine patron who asked a question that had crossed my mind "How come they won’t show ‘United 93’ here?” . Just a coincidence I'm sure!
----
Scruffy Murphy's
Ran into Sean on Third Avenue and 75th Street this morning. Scruffy Murphy's will not reopen. The building is for sale. Sorry to see this, as Sean's a good man who ran a decent establishment. He has throughly rehabbed the property, including the apartments upstairs, so it will be a good opportunity for somebody.
Posted by The Phantom at 2:37 PM No comments:

This decoy red light camera is on the westbound side of Bay Ridge Parkway ( 75th Street ) right outside Starbucks ( to the extreme left of the photo ).

Unlike the camera on 86th Street, this one is probably a fake. How do we know? No flash mechanism atop the " camera " .

This red light camera is in the eastbound side of 86th Street, near Fort Hamilton Parkway in Bay Ridge Brooklyn, right outside Nathan's.

If you cross Fort Hamilton Parkway against the light on 86th Street, this camera will take your photo. You'll get the photo in the mail, along with a fine of $100 or so. These things are at various places in the city. I was a passenger in a car on Hylan Boulevard in Staten Island a few years ago and the driver took the light one night. There was a large flash of light, followed by a ticket

The NY Daily News reports that the Alpine Theater has been saved.

It has been sold to " Queens flick magnate " Nicolas Nicolaou who will renovate the Alpine this spring. In addition to its principal use as a multiplex movie theater, there will be a " performance space " for live local theater productions.

Unlike my April 1 post, the above story is actually true!

To Nick Nicolaou: welcome to the neighborhood. Everyone, see you at the Alpine!!

Comments from Cinema Treasures
Posted by The Phantom at 2:23 PM No comments: