" Heart of a Soldier " Opera, About Rick Rescorla, Opens

Let me speak of Risk Rescorla.

Born in 1939 in the village of Hayle, Cornwall, England. Among his earliest memories were those of US troops preparing for the D-Day invasion.

A natural leader of men, he chose the life of a soldier. He joined the British Army and served in Cyprus, then in present day Zambia, Africa.

He later emigrated to the USA. As soon as he could, he enlisted in the US Army. He quickly became an officer, and as a young lieutenant, was a patrol leader in some of the nastiest fighting in a very nasty war.

Rescorla was known for great personal courage in the battle of Ia Drang. In the highlands of Vietnam, he raised the spirits of his men by singing Cornish and Welsh songs. He had great compassion for his men, for the wounded and the dying.

That's a young Lt. Rescorla on the cover We Were Soldiers Once, and Young. The co-author of the book called Rescorla "the best platoon leader I ever saw" 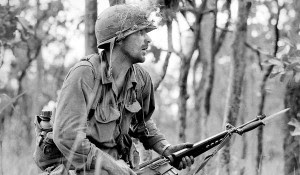 An older Rick Rescorla is the head of security at Morgan Stanley. In Two World Trade Center, some floors below where I worked.

Later, Rescorla, on the advice of his great Army friend Dan Hill, is led to believe that the building remained a terror target, and that the next time the attack would come from the air. He asks his employer to move to a low rise building. They refuse. The lease won't expire until 2005.

Rescorla does the best he can. He puts Morgan Stanley employees through up to four full scale evacuation drills every year, where they had to walk down up to 70 flights of stairs in an organized, floor by floor fashion. The stockbrokers hated the hassle. This type of frequent, full scale drill is completely unheard of in NYC.

When the plane hit the nearby One World Trade Center, building management announced that Two World Trade Center was secure, that they everyone should stay put. Rescorla ignored these instructions, and instead ordered a full scale evacuation. More than 2000 Morgan Stanley employees marched down the stairs, two by two, first one floor, then the next, then the next.

When the plane hit Two WTC, he kept his charges as calm as he could. " Today is a proud day to be an American," he said over his megaphone. As he had done in Ia Drang, he sang to his people to keep them calm - " God Bless America ". And his much beloved songs from back home. " The White Rose " and " Men of Harlech"

Men of Harlech, stop your dreaming
Can't you see their spearpoints gleaming
See their warrior pennants streaming
To this battle field

He got nearly every one of his 2700 men and women out. Except himself, his security team and one or two others. Afraid that someone had been left behind, he went back up. His body was never found.

I first read of Rescorla in this article in the New Yorker which I couldn't recommend highly enough.

There are many other articles about Rescorla, many quotes from his US Army comrades and from his Morgan Stanley co workers which back up everything said here, and more.

Today, we are on the eve of the tenth anniversary of the attacks, of the day when Rescorla got his people to safety.

Saturday, in San Francicso, Heart of A Soldier, a newly commissioned opera, will open. It's about Rescorla.

And about courage, duty, of the love and loyalty for soldiers for one another, these and other themes could make for a great story. I hope that the San Francisco Opera pulls it off.

Posted by The Phantom at 8:29 AM No comments: