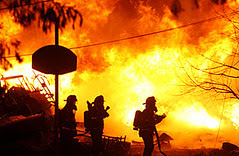 Plane Crashes in Suburban Buffalo, 49 Dead
Originally uploaded by MashGet
A Continental Airlines plane crashed in Buffalo New York last night, killing all 48 on board and one person on the ground.

A sad detail is reported in the NY Times, below:

"Among those on board was Beverly Eckert, the widow of Sean Rooney, a Buffalo native who died in the Sept. 11 terrorist attacks on the World Trade Center, according to The Buffalo News. She was heading to Buffalo for a weekend celebration of what would have been her husband's 58th birthday, and had planned to take part in the presentation of a scholarship award at Canisius High School that she had established in his honor, the newspaper reported."

I knew Sean Rooney, who was a good guy. We both worked in the World Trade Center.

Eckert is rightly critical of the failure of the US intelligence community to prevent 9/11:

I am not sure that this is the best time to bring that up but will leave your comment stand.