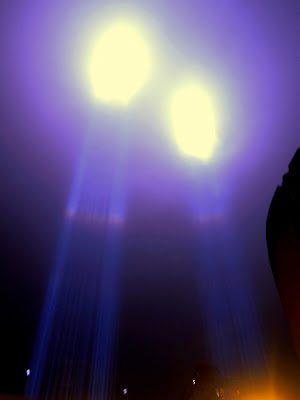 The Towers of Light were up, but you could barely see them through the clouds. I walked down to the entrance of the Battery Tunnel and captured them. 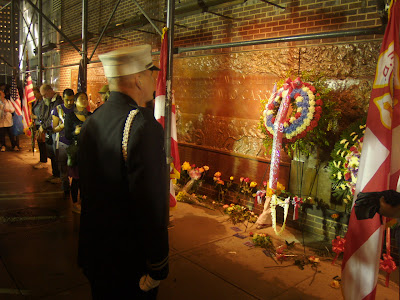 The FDNY Memorial down at Engine Company Ten is just south of the WTC site. It was hard to photograph Friday night, as it was raining, and there were many visitors, including a group of middle aged and trainee firemen from the Anaheim California Fire Department, and various US military.

There was an FDNY Honor Guard. Here, the senior officer is about to dismiss them.

One small block south, O'Hara's pub did a roaring trade.

Spoke to a construction guy down at the Bay Ridge Key Food site. He says that it will be open " in two months ". This project makes the WTC rebuilding look like a model of efficiency. I'm looking forward to doing my Christmas food shopping there. Christmas 2010.

Construction crews have been hard at work over the past couple of weeks gutting the place. A construction foreman said that the building might reopen " in eight months "

This would be much better than any of us expected.

Spoke to a neighbor who says that the owner, Bill, is a well respected guy who tried to keep the building in good shape.

Perhaps this building will reopen before the Key Food opens?

One of our readers is returning from Italy at the end of September, and is looking for a private garage in the Bay Ridge / Dyker Heights / Fort Hamilton area. If you know of one, let me know and I will relay it to him. His car is 193 inches long, 71 inches wide, and is 58 inches high.
Posted by The Phantom at 10:30 PM