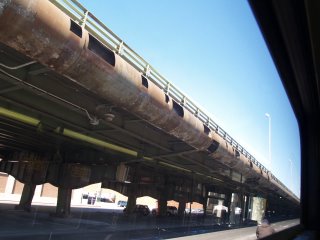 Also under consideration is a much less expensive elevated monstrosity to replace the bucket of bolts that currently bights our neighborhoods. I don't think our Congressional delegation has the muscle to make the tunnel happen. I don't think we'll be riding through a Gowanus Tunnel anytime soon.
Posted by The Phantom at 8:09 PM

It seems like there is always construction going on in the Gowanus. Is it just me? I think residents of the 3 neighborhoods mentioned would not even be phased by the major construction of building a tunnel(if that ever happens)We are used to the traffic and chaos of the Gowanus

I biked under there this morning and was just thinking there needs to be something better.

The tunnel is probably too expensive, but why not just take it down, and throw in another lane or two, and kill off a lot of the connections to sidestreets and make some overpasses, or underpasses. No one ever really needs to go from 4th to 2nd anyway... so why are there lights instead of just entrance lanes. Trees would be nice, too.