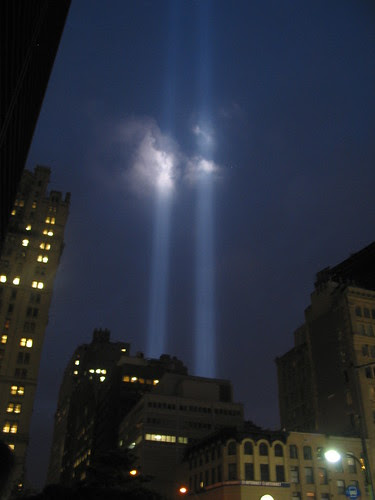 9/11/07, originally uploaded by lzplksk.
Today was a day that alternated between rain and the threat of rain, so different from the clear and perfect Tuesday of six years ago. Most appropriate.

I once worked in Two World Trade Center, 103 stories above the Manhattan streets. For five years, my company relocated near Grand Central Terminal. Not too long ago, we moved back downtown, over by the South Street Seaport. So this was my first 9/11 anniversary back in lower Manhattan.

I went to work today, and walked over to the World Trade Center sight twice, once at lunchtime, the second time on the way home.

As I approached Church Street around 11:30, I could hear them, still, reading out the names of victims from the "family area" at Liberty Plaza. I saw a woman walk quickly from that area, pain on her face, followed by others, presumably family or friends.

By the PATH train station, a small army of "Truthers", those who think that the US Government had intentionally arranged for the attacks had gathered. They were all dressed in black t shirts. Most of them were arranged in a cluster facing the stairs of the PATH Station. Passengers exiting the station, some no doubt to pay homage to their loved ones, were faced by an unsmiling army of Truthers staring them down.

I went back there at around 7:30pm The Truthers were still there, including a guy in a George Bush facemask handing out brochures. I took one. I used to be so angry seeing these people. Now I'm more sorry for them than anything. They couldn't be more wrong or more disrespectful, but they know not what they do.

I looked in vain for the Towers of Light. Looking just north of the WTC area, where they had shone the past four years, they were not there. Then, as I looked left, southward, on Church Street, I saw them in all their glory, reaching to and through some low clouds. Words do not describe, but lzplksk's excellent photo does do them justice.

A lone piper played "Amazing Grace". I could not see him, but I heard him, as the blue Towers of Light reached for the sky.

We remember.
Posted by The Phantom at 9:40 PM

I moved to the city post 9/11, so I will never know the comparison of life here before and after the attacks. I know people who lost loved ones, and I feel their pain (as much as possible) every year on this day. I still remember the day it happened, watching it unfold on television from the relative safety of my apartment.
I can see the blue lights from my living room window now, and I again feel desperate and angry that there is nothing I could do, or can do, to turn back time and make us all safe in this forever altered city, country, and world.

I just wanted to tell you that I appreciate your site. It is very well done, informative, sensible and sensitive.

Love your site Phantom. New York has changed alot since 9/11 but it is still a vibrant place to visit.