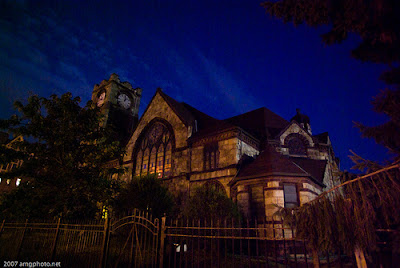 In June of 2005, on the steps of the , Congressman Vito Fossella held a press conference announcing the formation of an “Overdevelopment Task Force” to study soft-sites in this district.

He was quoted in his own press release as saying “this task force will develop a comprehensive game plan for our community before a piece of institutionally-owned property is even on the market.” He even created a sub-committee to specifically study the .

According to local press reports, the property is already in contract to be sold to a developer. We all know that once the deal is closed, all the buildings on the lot will be leveled and new ‘luxury condos” will be built in its place. Not only will a much-beloved building be lost but the resulting massive development will strain our already overloaded infrastructure.

The Committee to Save the Bay Ridge United Methodist Church (SaveTheGreenChurch@yahoo.com) was formed in March of this year after an unsuccessful attempt by Council Member Vincent Gentile to explore alternatives which would have resulted in the preservation of this historic church building. The committee has been working tirelessly since March to find a solution that will keep this building from being torn down.

Congressman Fossella’s subcommittee has had over 2 years to formulate recommendations for this site should it be placed on the market. There has not been one word from this task force or its subcommittee reported in the press. Our community desperately needs help in protecting this valuable landmark and other properties in the neighborhood which are also at risk.

The reality is that once this building is razed there will likely be a domino effect resulting in the destruction of many other soft sites which Congressman Fossella’s task force was charged with identifying. We already know of at least one other nearby soft site which has been openly reported to be at risk of demolition.

There has never been a more urgent time than now for Congressman Fossella’s task force, and especially its subcommittee for the , to publish its report and recommendations for saving this and other ‘soft sites’ in our neighborhood before its too late.

Committee to Save the Bay Ridge United

I actually just called Vito's office trying to ask about his position on the Iraq war... unfortunately, they said the Congressman is still waiting to make a decision based on "the report."

The staff told me to check his website... which is the best form of irony - because if you look at the Rep's website, they have scrubbed any mention of the word Iraq.

If you use the website search feature, there are 45 articles that appear from 2000-2003... but nothing since then.

Did he remove any mention of the word Iraq from his site??!?

Ain't talkin about Iraq here. Talking about the Church on Ovington Avenue

I'm assuming that this is not an active United Methodist congregatiion, and that the New York Annual Conference has sold the property?

There are at least 2 congregations using the church. Bay Ridge United Methodist has approximately 60 members, many of them older people. UMC Pastor Robert W. Emerick and the board of trustees represent that the congregation and the board have approved the sale and that the Northeast Conference, which will garner the proceeds, supports the decision.