Bay Ridge from the Air! 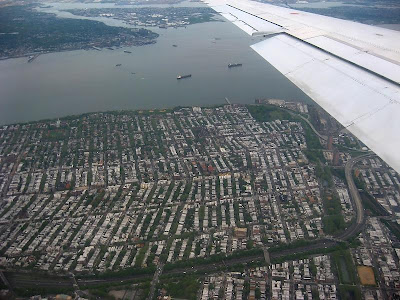 If you look under the wing, by the small slit and where the Belt Parkway and Verrazano access roads merge, you see the twin [reddish] Bay Ridge Towers buildings and can navigate from there. My house is about four blocks to the left of the east tower, the one closer to the bottom of the photo.

From the low traffic volume on the BQE access roads, my guess is that this was an early morning flight into LaGuardia, probably on the weekend.

At the lower right, you can see the Dust Bowl sports field, dusty as ever. Grass will never grow on that land for very long because of very heavy use by softball / soccer / football teams.

As you go from left to right on the photo, the roads head to Manhattan.

Going right to left by the water, you can see Owls Head Park, the 69th Street Pier. baseball fields, and Fort Hamilton High School and its athletic field.

Staten Island and New Jersey are across the great Narrows, a part of New York Harbor that connects the Hudson / East Rivers with the Atlantic Ocean. If you head a couple of miles to the left, you'll pass the Verrazano Bridge and be in the open Atlantic.

---
Bet you didn't know this: Muhammad Ali once spoke at a KKK Rally . And they liked him. No joke. From a film primarily about the great Joe Frazier, and recently shown on British television. It shows a different side of Ali- who was vicious and cruel to the great Joe Frazier for years. Ali wants to forget this. The proud Joe Frazier never will.
Posted by The Phantom at 11:16 PM

Wow, I can see my house from that picture.

Me Too! Great shot. I used to have a friend in East NY and from her Apt we could see the entire neighborhood, Staten Island and the Narrows. Bay Ridge looks good from any angle.
;)

Wow, that's a fantastic shot. Here's a closer look from down on the ground: http://www.youtube.com/watch?v=qACXzAClSag