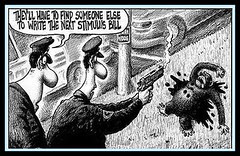 The Post Apologizes (?) (4 of 4)
Originally uploaded by Tony the Misfit

We've recently seen a fake controversy about a political cartoon that ran in this past Wednesday's New York Post.

In the context of nonstop reporting about a terrible incident about a chimpanzee mauling a woman in Connecticut, Page Six cartoonist Sean Delonas produced a political cartoon where police shot a chimp, and said " They'll Have to Find Someone Else to Write the Next Stimulus Bill "

Some, led by the racist comedian Rev. Al Sharpton have claimed that the cartoon is comparing President Obama to a chimp who is worthy of being shot. That's a lie.

NY Post political cartoons are not known for their subtlety. It's part of their Pier Six Brawl charm. But this cartoon is one of two things- a) a connection to Nancy Pelosi, who with her simian friends did write the slapdash and pork-filled stimulus bill, or b) two, a botched and hastily drawn cartoon that connected the top two issues of the day in a way that does not make sense. My vote is for b.

But this is now a freedom of speech issue. When a boycott is called by Al Sharpton of Crown Heights Riots / Tawana Brawley / Freddys Mart firebombing fame, count me out or, most likely count me in for the other side.

I will make a point to buy the NY Post tomorrow morning and most every morning to come.

Regardless of press freedom - the guy is a dirtbag cartoonist. His style is so crude that it looks like something a 12-year-old would scrawl inside a notebook cover.
And some folks will never forget his cartoon showing two firefighters at Ground Zero on 9/11: While one of them is dying, the other asks "Is your wife free Tuesday?"
It was an alleged-funny comment on 9/11 widows who 'broke up' FDNY marriages. It was as offensive and vomitous as this 'chimp' cartoon.

The cartoon is indeed very racist and deserves the protest it has received. One must look back at the historical context in which African-Americans were compared to apes and chimpanzees to understand why this cartoon is not simply just in poor taste. In addition, the stimulus bill is directly connected to our current President, who just happens to be an African-American.

Supporting the cartoonist and the paper that printed the vile cartoon speaks very clearly to overt racism AND incredible ignorance.

I don't remember that cartoon. But I have seen many obnoxious cartoons in that paper- it comes with the territory.

I also remember them breaking stories such as the Father Bruce Ritter sex scandal that other newspapers wouldn't touch with a barge pole.

It's easy and cheap to throw the word "racism" around, especially by ignoramuses such as yourself.

But, sometimes a cigar is just as cigar.

There's nothing in the cartoonists' body of work to remotely suggest racism. He's a better man than you, my son.

Where were all the protestors and their fake outrage when President Bush was constantly derided by the media elite as a chimp??

"Where were all the protestors and their fake outrage when President Bush was constantly derided by the media elite as a chimp??"

That's a disingenuous and tone-deaf analogy.

Bush's (and my) entire race hasn't racistly-historically been compared to "apes" and chimps -- as shorthand for the belief that our entire race was dismissably subhuman.

And if you agree that the cartoon was about Obama: You surely must realize how disturbing the imagery was -- two white cops killing the "chimp," w/implication that this "solved" something (eliminated future policy foulups).

The Phantom said...
'I saw the cartoon that morning and Obama never crossed my mind - really
'It seemed like just an unfunny way of connecting the two big stories of the day'

It was unfunny and puzzling to many, at first, because there's no obvious link between a crazed attack-animal and a fed stimulus bill.

But that also gave it a racist spin: the cartoonist really had to "reach" (wildly) to connect those two issues - i.e., had to really _want_ to get that "ape" in there somehow, and link it to Obama.

If he wanted to rap gov't and lawmakers in general, he wouldn't have made it a "one-ape" cartoon.

And it's naive to think that the very-savvy cartoonist and editors weren't aware of the "wink-wink" message conveyed - and how nifty it would be to create a dustup, claim innocence, and imply that protesters were just race-o-centric crazies.

Obviously you have never researched the history of immigration very well. The Irish and later the Italians and the Jews were often portrayed as apes and monkeys in New York newspapers during the 19th century.

Anonymous said: "The Irish and later the Italians and the Jews were often portrayed as apes and monkeys in New York newspapers during the 19th century."

I'm well aware of that.

However: The Irish/Italian/Jewish animal-slurs weren't applied to a race, but to select white ethnic groups, and were based on xenophobic hostility to their religion, poverty, language, and overall non-Western-Protestantness.
The common use of those slurs stopped when these groups "proved themselves" and were perceived as white Americans (though Jews obviously still face slurs in some quarters).

In contrast: The blacks/apes slur attacks people based solely on race - implying that nonwhiteness makes them permanently, irrevocably subhuman and defective, regardless of "Americanness" or accomplishments. And it has been in continuous use for nearly four centuries.

My interpretation is that the dirtbag cartoonist was trying to say that cops are racist. It is no surprise that he is the subhuman that made fun of firefighters and widows right after 9-11. I will neber again buy the Post, not even to line my birdcage with.

Anonymous said...
"My interpretation is that the dirtbag cartoonist was trying to say that cops are racist."

To reach THAT conclusion, you had to get that the chimp was supposed to be Obama, which bolsters the claims that the cartoon is racist.

So this guy slurred 'firefighters and widows right after 9-11'; thinks blacks are chimps; portrays white cops as black-killing racists; and creepily hints that assassination (of a pres. who's at high risk for racial reasons, and already faced some threats) is a kinda cute idea?

Delonas and the editors at the Post know who their audience is: the white ethic outer-borough working class. They also believe they know how this demographic thinks. And so, here comes a cartoon to stoke what they know is an already present racial animus against Obama. I don't think the Post, or its nitwit cartoonist is necessarily racist, but they know how to play with racism to their advantage. A skill Rudy G. also had in abundance.

Rudy was our greatest mayor

And if you travel outside NYC you will see many, many copies of the Post being read on the LIRR AND on Metro North, and on NJ Transit.

The Phantom said...
"Rudy was our greatest mayor"

I know you hold Rudy in very high regard, most of Bay Ridge does--except me and the other few lefties. And I'm sure you could spin tales about all the wonderful changes he made to our fair city. "Rudy got results," you might say, and that's all most people in the Ridge need to hear. I'm sorry that I don't share your "ends justify the means" attitude. He was, in my opinion, a bully who tried to stifle dissent, inflame racial tensions, and was obsessed with rules and order to the exclusion of caring about actual living people. Well, I could go, but you've heard this line before. Let's agree to disagree.

The Post is not the only newspaper that carries tasteless cartoons, the Daily News has as well.

This has been blown over to the extreme by such agitators as Sharpton.

I recently saw 20/20's report on the Central Park Jogger. We all know that if this jogger had been white, the media & Sharpton of course would have brought this to the extreme fore front, to say the least.

This is the shameful state of one-sidedness of our society today.

I second the motion- Rudy was the GREATEST MAYOR, BABY!