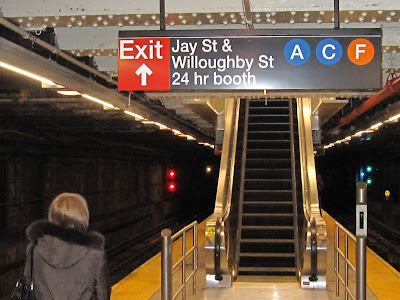 Save a few bucks, and give 'em a try. Your next trip to Honolulu or London begins with the N or R train!
Posted by The Phantom at 9:54 PM

this new connection is perfect for shopping at WholeFoods at the 2 AV/Houston St in Manhattan.. just a few stops with the F and all the way with N/R.

also a great transfer connection to the new Highland Park in Chelsea with the A and C trains.

also a much more direct connection to Port Authority Bus Terminal at 42nd Street or Amtrak at 34th Street.

What is Highland Park?

I work right by the South St Seaport.

Normally, I don't mind the walk from Cortlandt St R train. But now when it is rainy or very cold, I can take this connection and get out four blocks closer, at Fulton & William Sts. ( Much preferable to the painful connection to the 2/3 at Atlantic which takes you to the same place )

sorry, it should be Highline Park in Chelsea 14th St..

Great post with nice details. Thanks for sharing. Cheap Gatwick Meet and Greet