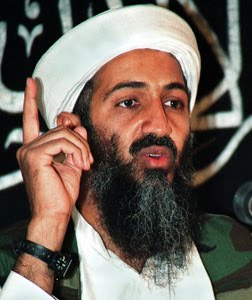 God bless America.
Posted by The Phantom at 11:25 PM

I was just thinking how hard dialysis is on the body. I watched with heartbreak a parent age 20 years in 6 months on dialysis and have major hospitalizations at least once a year as a result of complications that come from dialysis. Dialysis is life sustaining treatment that just so happens to be hell on the body. In short, I highly suspect Osama bit the big one ages ago.

you know what would be great? A picture of the dead Osama to go with this wonderful post

Its very telling that a certain group of folks cheered and danced on 9/11 and are now as quiet as a church mouse. I wonder why?