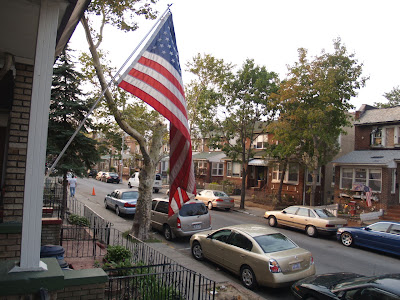 For this and other photos, double click to enlarge

One week after the tornado, the neighborhood stands tall.

There's a great deal of work that needs to be done.

Some of our neighbors have had the most awful week. They're living in hotels. They come back to their houses to try to move the process of rebuilding forward, or just to be there.

If you happen to walk or drive by, its easy to think that things are normal. They're better, but not normal. Some of our friends are having an awful time. A lot of the rest of us have had an awful scare. Some of us will only be discovering specific damage to our homes in the coming weeks. 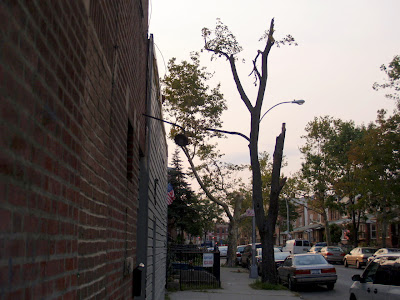 I remember when this tree, in front of 374 68th Street, was immense, with strong branches extended over the street. The house was owned in the 1960s by a old lady named Maude ( "Aunt Maude" ) who had lived in the house since the 1920s, when there were vegetable patches across the street, in a Bay Ridge that still had lots of farms in it.

She saw this tree grow up, and we're now seeing it in its last stages. A huge chunk of it fell onto the street last July. Now the storm has ripped much of the remaining branches from it. Its a stick, a shell of its old self now. 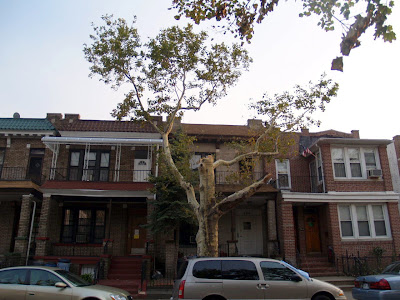 A smaller, relatively young tree in front of 370 68th Street was destroyed.

This tree, in front of 366 68th Street suffered a lot of damage. A chunk of that big branch to the right snapped off.

And amazingly ( look closely) the top part of the trunk was ripped off cleanly.

The trees on this street and on Bay Ridge's other fine streets and avenues are its crowning glory. They've been hurt badly. I hope that new trees are planted and that the injured ones recover.
---
I was told that Mr. Macey, who with his family lived for many years at 370 68th Street, died last week, about an hour after the storm hit. He'd been living in Toms River, NJ. He was a good neighbor and a fine man. God Bless.
Posted by The Phantom at 9:26 PM