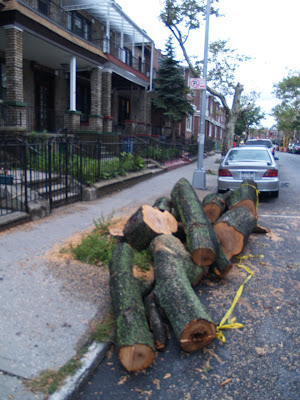 This tree, which had graced the south side of 68th Street, near Fourth Avenue, for many decades, was cut down on Tuesday. It had been sick for some years. A huge chunk of it spontaneously fell in July 2006. The tornado gave it a mortal blow. Still, its sad to see it chopped down. Hope new trees are planted soon.

From Steve Baldwin's great Brooklyn Parrots, an article on how the feisty Brooklyn parrots survived the tornado.

As I write this, I'm keeping an eye on CNN's "Holy Warriors" program, hosted by Christine Amanpour. I have my quarrels with this show --it gives equal weight to Christian, Jewish and Muslim "Holy Warriors", which is laughable moral equivalence. Yet, there is a lot of depth to this show. Amanpour here travels through Europe and the Middle East, speaking with knowledge to politicians and (literally) ayatollahs.

CBS totally missed the boat when they gave the "first female anchor" job to the perky airhead Katie Couric. This has only led to a complete collapse of CBS's ratings. Had they gone the more serious route, had they given an actual journalist such as Christine Amanpour a shot, they would have been so much better off.
Posted by The Phantom at 10:24 PM

It is sad to see that tree down. It watched upon us all as children through the seasons but sadly, couldn't take this storm.