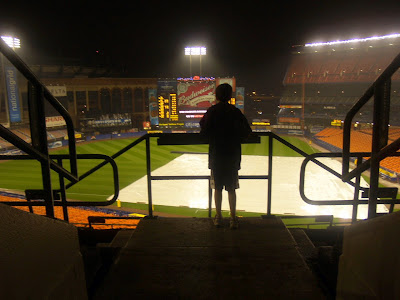 Bobby, Helen and I went out to Shea Stadium last night to see the Mets take on the Atlanta Braves.

The weather did not cooperate, so there was no game.

But we did get to hang out in the stadium until the game was called. We ate some shockingly priced food, chatted with some visitors from Atlanta, and walked around. 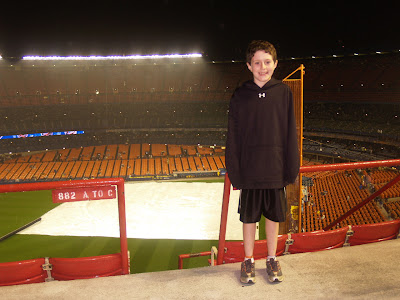 This was Bobby's first and only time in the House that Seaver Built. I took him to the upper deck, where I spent many days and nights.

We went to the last row of the the upper deck, just to do it. "This is really high" he said. You got that right. The upper deck of Shea Stadium seems like the highest place on earth!
Posted by The Phantom at 9:47 PM

I thought of you right away when I heard that the game was rained out. too bad the boy (your nephew) won't get a chance to see the Mets play at Shea, although if the past few days are anything to go by maybe it would only have been a terribly traumatic memory.

Actually it would have been a great memory for him. He lives in Philadelphia, is a serious Phillies fan, and was rooting for the Braves!

I can't talk him out of it!