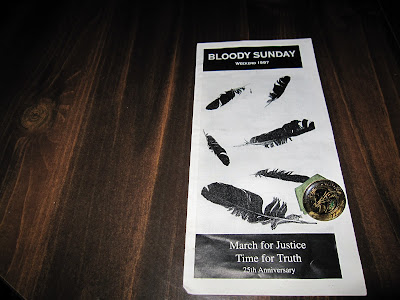 In 2007, I was in Ireland. Much to the amazement of some of my friends in New York and Dublin, I decided to go north of the border. To Belfast. Then out west, to Derry, without an agenda.

I checked into Joan Pyne's Bed & Breakfast on Great James Street Saturday morning. Roamed the Walls of Derry, had a pint or two, spoke to a few locals. 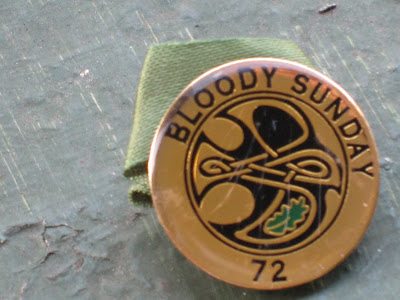 And learned that the next morning was the 25th Anniversary of the Bloody Sunday killings.

And that there would be a commemorative march along the route of the original march in 1972.

I walked with them that beautiful Sunday morning, up the hill to the Creggan Estate, back into the town I saw no angry people - this was a day to remember, not to vent. One comment I remember was about how completely unnecessary the violence was.

One of the people I spoke with gave me a small pin. I thanked him, and promised that I would keep it, and that I would show it to people. Here it is.
Posted by The Phantom at 8:57 PM

Nice post. At least Saville has relieved a little of the pain.