The New King of New York 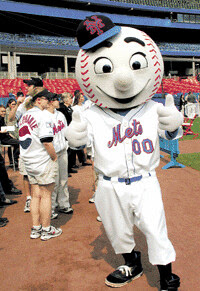 He's always smiling, and his he has a huge baseball where his head should be.

If the Mets get to the World Series, or win it, then Mr. Met will be the King of New York for a long, long time.

New York has been a Yankees' town for the past couple of decades. But it was a Mets town in the 1960s, in the mid 1980s, and we may be entering a new National League reign right now. Last night, as the last out was made by Shawn Green in right field, there was a changing of the guard in New York. Its a Met town again.

And, up in the Bronx, the knives are being sharpened for both Joe Torre and ARod. This offseason will not be pretty in Yankee Stadium.
Posted by The Phantom at 10:29 PM

Mets town? Over my dead body. I hope th' Mets choke. SWEEP! SWEEP! Beat the Mets, beat the Mets. The other guys will cream the Mets...

Do not count your chickens before they are hatched.

I'm sad it's over for the Yankees, but I think wolverine is pretty cool.

Eagle: you are soaring awfully close to the sun.