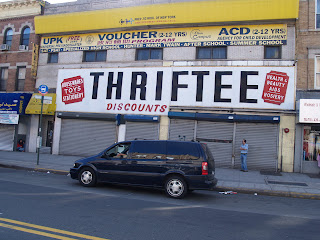 I went past Thriftee's on Fifth Avenue and was surprised to see it was still open. The man behind the counter said that they'll be open until the end of July, maybe until August. Then, that's it.

Some activity in the store in Kirk's building, on the NW corner of 68th Street and Fourth Avenue. It will be a gyro-type restaurant. Good.

Suicide
If you want to read conversations of high quality on a topic noone talks about, see these threads from Ireland's Balrog and A Tangled Web

Who's the dumbest blogger in America? Why, its William K. Wolfrum, that's who!

Wolfrum's An Apology to Mike Nifong (really! ) begins with

"As the game of pile-on continues for Durham County, North Carolina, District Attorney Mike Nifong, and the ethics trial over his words and actions in the Duke lacrosse case comes to an end, many triumphant conservatives want little more than his head on a stick to be used as a cautionary tale for rape victims looking for justice. Of Nifong’s sins - of which there are obviously several - his representation of a black woman against white college students is by far the worst to authoritarian crowd"

One, the bolding is mine, and two, I am not making this up.

If you care to read the comments, you will see stuff like this from something called "Meowser"
"Yeah. “Those poor kids.” Get the fuck real, dude. “Those kids” are ROCK STARS now, get it? This case was the best frigging thing that ever happened to them. They will move to the top of the class for every job interview. One of them will probably be President one day.

Meanwhile, their accuser will never ever have anything approaching a “normal” life ever again, if she is allowed to live at all. More likely, though, she’ll eventually be assassinated. But these “poor kids” should be thanking her. Thanks to her, they have all the power on earth and can go on to screw whoever they want, literally or figuratively, forever."

Don't laugh. The person who wrote this believes this stuff. There are more like him, at a college near you.

Congratulations, Mr. Wolfrum. For you to draw these bizarre conclusions, after all we've learned, and to actually put them in print, you are truly The Dumbest Blogger in America.
Posted by The Phantom at 8:33 PM

I live on Bay Ridge Avenue between Narrows & Colonial...lots of police activity tonight. There was a robbery interrupted and a person assaulted. Must be pretty bad because the street has been closed, helicopters hovering from time to time, police are escorting residents to their homes, telling residents to go inside and interviewing residents. Any one have any scoop?

About the whole thing opening until July and/or August, the owner was unsure of how long he was going to stay. The lease was up in the beginning of '07.

The landlord wanted 12k a month (increase from 10k). But the store was already going downhill, so the owner couldn't keep up with the landlord, and fought to keep the store open until the end of August.

We were prepared to close in the beginning of '07. It was just a matter of time...