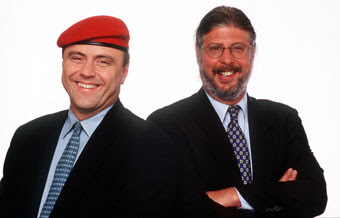 Curtis and Kuby-- please team up and find a new home on WOR or some other station that has no one in the morning. Then you can kill Imus in the ratings in NYC, as you did for many years.
Posted by The Phantom at 11:00 PM

I am with you on this. Kuby may be a radical, but he was a polite one and a thinking one. He sat near me a couple years ago at a Lincoln Center benefit concert of the NYFD. Interesting guy. Sliwa is quite a bit stranger, but certainly the two were btter than Imus who actually isn't all that funny.

Adding two black sidekicks -- how lame is that? Its so fake, so transparent.

I need a morning radio show. And though I will give Imus the odd listen, he ain't it. Time to do some exploring.

Just in casual conversation, I've heard several people who are angry that Curtis/Kuby are gone. God, I hope that they're quietly looking for another gig.

I never thought that the cancellation of a radio show would sadden me like this. For years I counted on Ron and Curtis to start my day with a smile on my face. I moved over to Boomer and Carton for lack of anything else I could think of at this time. I would never listen to Imus... not before, not now, not ever.

It's going to be hard for me to adjust to the absence of Curtis and Kuby. They were part of my daily routine for years. Imus certainly can't measure up in my eyes. I can't stand him. This hurts.

Why don't we all listen to Howard Stern instead? What ever happened to him?

Stern's a complete waste of time. Didn't listen to him when he was on free radio, and I'm certainly not going to pay Sirius a monthly subscription to hear him and his fart jokes.

I have never been a radio talk show listener, but I would get a kick out of seeing and hearing these guys give their views on different topics on Channel 5 news in the morning. I will miss that-I particularly like Sliwa's no nonsense and realistic views!