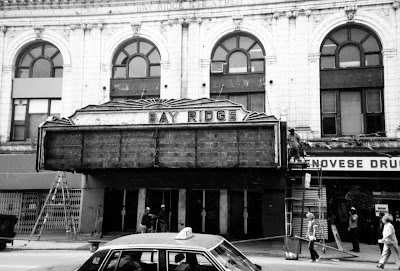 The old Bay Ridge Theater( the book says the late 1960s, but I suspect its a bit later) before the marquee came down. Click to enlarge. Note Ro Val car service vehicle in foreground.

I've spent the last few days reviewing a copy of Bay Ridge, a 96 page quality paperback that will be available on January 19.

Most pages have two photos - one of a Bay Ridge scene from the past, the second a current or near-current image.


The contrasts in some cases are wonderful.

Some of my favorites include-
The book is filled with little treasures like this. I've picked it up a number of times, only to discuss wonderful new details and points of history.

The authors will be at a book signing at Barnes & Noble, 106 Court Street, Brooklyn, at 7pm on Monday January 19 ( Take R train to Borough Hall or take the Third Avenue ( B37 ) bus to Court and Livingston Streets. ) 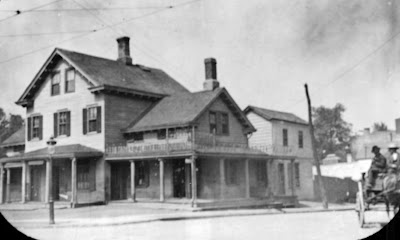 Unfortunately, Bay Ridge does not now have a book store in which a book signing could be held.

This building as it stood on the Northwest Corner of Bay Ridge Avenue (69th Street) and Third Avenue in 1891 when ( one of the streets ) was known as Bennett's Lane and " Yellow Hook Road " and when the intersection was known as " Pope's Corner". Bay Ridge Family Eyecare shop there now.

Photos printed with permission from Bay Ridge, by Peter Scarpa, Lawrence Stelter and the Bay Ridge Historical Society. Available from the publisher online at www.arcadiapublishing.com or by calling 888-313-2665.

Will post more images from this fine little book tomorrow.

An Our Lady of Angels blog has been created by concerned Bay Ridge residents who want to help save the school. I support this move, and have linked to that site.
Posted by The Phantom at 10:40 PM

Great photo. And I think you're right--it seems a bit later than the late 1960's.

There used to be a karate school on the second floor of that building. I took classes there many, many years ago. Now it's the New York Sports Club.

And I will be going to that NY Sports Club branch in about ten minutes! Its good.

You go to NYSC? Which one?

I was afraid that the Third Avenue location would lose members when the 86th St branch opened. But that has definitely opened - Third Ave is has definitely gained members over the past two years.

Today, it was really packed. All those New Years resolution people.

When did you take the snowstorm photo?

Believe it was two years ago. Just experimenting here.

Phantom--I usually go to the NYSC on 71st. Since I work in lower Manhattan, I go to the clubs on Wall Street or City Hall during the week.

I also hit the Park Slope gym on Sundays when I can for the boxing class.

And you're so right about those New Year's resolution people. Give it a few more weeks and the herd should thin out.

Sounds pretty good, and a wonderful picture you got there The Phantom :)