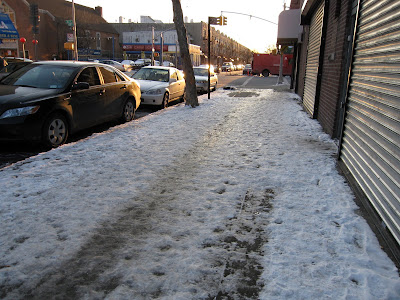 Photo taken on Wednesday morning, but the conditions are the same Thursday morning. Click to enlarge.

The owner of the building at 386 68th Street almost never shovels the snow in front of his property.

NYC law requires that landlords remove snow from the sidewalk in front of their property within four hours of the end of snow, or the next morning if the end of the snow is at night.

The most recent snowfall ended Monday in the daytime. It's now Thursday, and the sidewalk at 386 68th St is still unshoveled, and is now hardpacked and dangerous.

Note that Fourth Avenue in the background ( and every other street in the city ) have been clear since Monday night. Not this sidewalk.

NYC does not enforce the snow removal law.

The worst offender? New York City itself. Take a good look at the overpasses over the highway up on Seventh Avenue. They're owned by the City. And the City has never shoveled any of these walks, not for the past fifteen years anyway.
Posted by The Phantom at 6:49 AM

I think the Tower of Bay Ridge should shovel that snow?

Someone shoveled both this corner and the 86th St overpass yesterday. Whoever made that happen, thanks.

We will keep a close eye on both this property and on other problem buildings the next time it snows.

Not the snow on 68th Street.

It was shoveled in the morning, and the similar small patches near trees and poles and cellar steps did not melt.

Can't speak for the overpasses, but it sure looked freshly salted from what I hear - a rare occurrence I am told.

Over here the council does it :) they grit and salt the roads and pavements before a snow storm.

When are you in London again btw and what is your email?

I just walked from 92nd and Shore to 75th and 5th. About 20% of the sidewalks were shoveled. I am livid and so sick of this.

Bet that landlord will regret not shoveling the snow in front of his property when someone slips and falls and hurts themselves badly enough to turn around and sue him. That's when he'll care.

I've been calling 311 on repeat offenders, not sure if it does any good, but it makes me feel a bit better. You can make your complaint anonymously.